Shout out here for Coach Hollands 79th birthday today. I was able to facetime him and Mrs Holland for a good 30 minutes yesterday and Coach was all smiles from ear to ear. As a first year (only year he was my coach) after we lost in NCAA Tourney, and he knew was his last game, we walked off the court together and Coach had his arm around me. Just a good memory for me with such a great man.

Got to meet him when he was recruiting Richard Morgan. He came to the school to meet with him, I saw TH, and asked for an autograph. What stuck with me all these years later, after he signed the autograph, he stood and talked to me probably 10 minutes. I mean, he was there for Richard but still took time to talk to a 16 year old kid kinda awe struck. Will never forget it.

Happy Birthday to Coach Holland. At the Final Four in 2019 I was at the team hotel after we beat Auburn. I saw him, Ralph, Ricky Stokes, and Jimmy Miller and got a picture with all 4 of them. I totally went all fanboy over that pic as that was my childhood right there rooting for UVa! There were a lot of people around him but he was so gracious to shake my hand and take the picture.

Post those two games at the hotel was alotta fun. Lot of the old guys were there. We all met up at The Loon Cafe pregame to get it going

Happy Birthday Coach Holland, thanks @DFresh11 for posting and giving an update. Remember meeting him when he was AD, and he was always nice. Sat at his table for a pre-game reception and he put up with a 8 or 9 yr old Dragon being a typical crazed sports fan kid. He remembered that even years later when I was in my teens. Always appreciated that.

All I could find Fresh on the bench 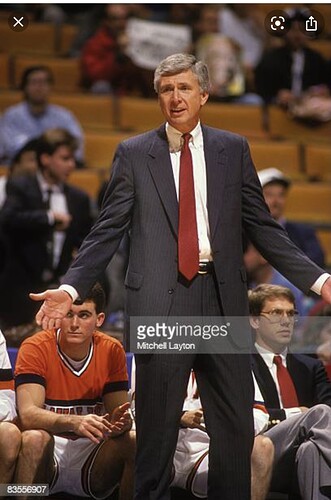 Fresh on the bench

My Mom thought he was the most handsome man in the world. Back in the day when my friends and Mama sometimes would go to Cville for games we got the chance to meet and talk with him on several occasions. He was always very nice and would take time to talk with us for a little while. Got a bunch of pictures with him and various other players. Dont know how Mama put up with us as we were always drinking but we all had a ball. He is pure class

Happy birthday Coach Holland. He was a college classmate of my uncle at Davidson back in the 60s. I had a very nice conversation with Coach in Minneapolis in 2019. He had no reason to know me but we talked for quite a while and showed genuine interest once I explained the connection. A true ambassador of UVA.

Looks like the fans were obeying Covid seating protocols even back then.

Must have been a tournament game. We’re in our home uniforms, but that’s not U-Hall.

I think was in Richmond Times Dispatch tourney my first year. based on my hair alone

Living in Durham, I occasionally look at a couple of the Duke basketball message boards. One board included a nice discussion about Terry Holland yesterday and today:

Although not universal, it is not that unusual to find compliments and statements of respect about UVA on Duke boards.

That was a great story and brought back many memories of that day. My prayers are with Terry and his family. Another class act.
You got to love someone with a dog named Dean

I wonder if I’m the only one who remembers when Bill Gibson left UVa. In his last home game as UVa’s coach, Virginia was playing Davidson, where Terry was the head coach. UVa had a chance to win the game with a last second shot. For some incredible reason, UVa never even got a shot off, even a bad one. So, UVa lost. That was Bill Gibson’s last game at University Hall, and no one knew at the time that Davidson’s young coach would be our coach next year.

And when Terry moved here from Davidson, his wife became a French teacher at Charlottesville High School and Terry brought his nephew with him. I’m not sure why that was. The nephew was a strong player, but not ACC height. He played 1-2 years for Albemarle High, which at the time had it’s best teams ever. I think his name was Gregg Holland. Maybe he went to UVa as a “regular student.”