Dante Harris is a Hoo

Well this is interesting Seems like many viewed Dante as their best player the last two years. Had an injury at the end of last season; no idea if it was minor or enough to linger through the summer and affect the pg competition.

Solid assists per game. Coached by Curtis Staples in HS. May have impressed staff when we scrimmaged Georgetown last season. @EthicalHoya
Kudos to Dante. Pretty much tells you all you need to know about Ewing's management and use of talent. #Hoyas twitter.com/TiptonEdits/st… @NationWideNolan
I mean, what does Tony Bennett know anyway twitter.com/tiptonedits/st…

Even if Reece doesn’t goes pro, we need another ball handler. If he does go pro, he’s more proven than what we’d get from an uncommitted 2023 PG. @HoozGotNext
Dante Harris plans to redshirt this season, will have 3 years left to play starting next season. twitter.com/Aye_Shakey/sta…

He’s gonna be a beast backing up 8th year Kihei.

Copying and pasting this from the VIP thread

The case for Dante
-1 point guard on the roster >>> 0 point guards at the roster which is what we were looking at prior to this addition.
-2 seasons as a double digit scorer in a power 6 conference
-Strong defender for his position
-Big east championship run shows he has that dynamic aspect that can win you games in March
-4+ assists a game
-A dawg
-Tony likes him enough to take him after doing his research and we know how finicky tony is with his offers.
-free throw shooting shows he has the potential to be a shooter.
-Cant overstate how bad a situation he was in with that horrible coaching and team at Georgetown. And Kihei/Reece showed that 3pt shooting can improve in an offseason worths of work. And Dante will have McKneely at the two most likely, not another pg who doesn’t have too much 3pt gravity.
-Has 3 years left and is going to improve. We will most likely have brought in 1-2 other pgs during that time as well. Might still bring in a 2023 pg reclass or a grad transfer 1 year pg. Tony likes 2-3 pgs on the floor at all times. Still need more

The hesitation around 3pt shooting is of course valid. But a player’s stats and individual aspects don’t happen in a vacuum.

I dont think this was rushed by anyone and may have been in the works for a while. Clearly they understand the pros and cons of taking a pg early. Again they probably will add 1-2 more pgs over the year. A good chance Dante and the 2022s could be the only returners for next season + Gertrude and Buchanan makes it 7. 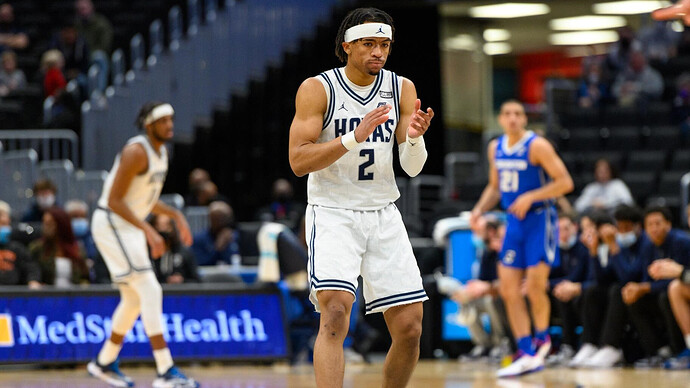 Georgetown transfer Dante Harris announced his commitment to Virginia on Sunday. The 6'0 point guard was a two-year starter for the Hoyas.

So I’m assuming this doesn’t affect the normal ‘24 PG recruits but instead takes the place of the potential 2nd PG who is ‘24 but reclasses to ‘23. This interpretation correct? @HoozGotNext

Edit: Your write up indirectly says yes to my question. Appreciate your work.

I’m coming around a bit now after having read his comments about the move. While the 3pt percentage is troubling, he sounds like a high character kid who is totally bought in.

Having a hedge in case Beekman goes pro is going to allow the staff to focus on getting better talent without having to worry about another need. Having a semester to soak in basketball instead of just the summer is going to be huge.

Hmmmmmm I can’t help it, the numbers make me skeptical. What potential other transfer PGs will we miss out on this off-season that could be much better shooters? I understand numbers have context, but cmon. They ain’t pretty.

with Reece probably declaring and keeping his options open until late in the transfer process, probably not that great.

Sounds like a very unusual transfer recruitment all around. Just the timing alone is totally weird (my first reaction: huh? we’re getting a transfer commit in December?). Kinda wonder how things went down at Georgetown that he didn’t transfer after last season but ended up stepping away from the team prior to play this year. “Personal reasons,” so I guess we’ll never know. Just glad the coaching staff saw the opportunity.

Do we know how the initial connect between him and UVA was made?

What potential other transfer PGs will we miss out on this off-season that could be much better shooters?

I think you have to remember elite pg portal prospects are getting paid atleast $200k most likely. They dont care about winning and some don’t care about their pro prospects/feel like they can show out anywhere and get a two way contract.

If they are good enough to go pro they go pro, if you are a 4 year player, it’s highly unlikely the 5th year makes you a sudden pro.

We have to remember Tony isn’'t just being like “Oh hey a pg target popped up” LOL. That how us fans think it happens. They watch tape and what not and evaluate all of that.

Also again we are going to have 0 pgs on the roster next year. Heck we may still take a grad transfer if Reece is gone. This year shows that having 2 playmakers on the roster may not be enough, so Im okay with at least securing we have 1 on the roster. And to be honest he is way better than many of you are making him out to be. What sophomore has 2 seasons of double digit ppg at the power 6 level and 3+ assists a game?

And he’ll be better in an actual system not forcing shots, surrounded by a better team with 3 years in which he will improve. And we will have other point guard and guard additions as well

How does he have the extra pandemic year? I thought that was for the ‘19-‘20 season only