Diving into the shrinking 2021 recruiting board 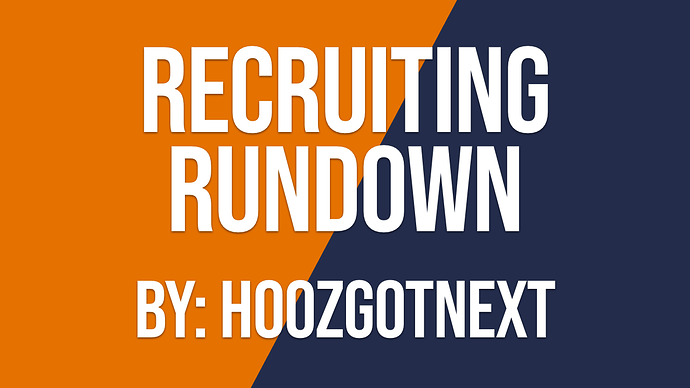 Fans are antsy, and that’s an understatement. Class of 2021 recruits are flying off the board. 15 of the 247Sports Top 100 committed in July, with several more setting announcement dates. Meanwhile, Virginia is without a pledge entering August for...

If we get Keels and either Gregg or Kaufman, 2021 would be a homerun class.

Loved the Update! Thanks HGN…Personally Im quite happy that Bennett is playing conservative and not throwing offers out left and right. The man knows who are the right athletes for this program and we dont need to become desperate. If he cant fully evaluate them and make a wise decision, wait til 2022, especially in a unique year like this. It may play out that we take a smaller class this year, and reload next year…UVA is a top Basketball program, and there is no reason to be desperate and start taking recruiting guesses in my opinion. …Plus I think it really shows the ones we have offered, we are offering them in a very genuine and sincere way…Basically the message is “our head coach knows you are a right fit for this program”…RATHER than, “Your not really our first choice…but I guess I will have to settle.”

Just a quick question on Efton Reed…So maybe I missed something, but I really dont understand why people are thinking we are no longer in the lead…Last I saw, He was at the UVA home game where we put Louisville in their normal place and he got to witness that first hand…Everything about his humble personality just screams the 5 pillars of Tony Bennett.
Yes, we took Trey Murphy which filled the last available re-class spot for Reed…but from I remember, at that time he wasnt really leaning towards a reclass…And his not reclassifying was a good thing for us…so am I missing something…From my perceptive we are in a good spot and he just holds his cards close…

I won’t probably be able to summarize it accurately, but if you look further up in the previous thread, there was some discussion on Reid. While nobody knows for certain what is going on, from general chatter it sounds like he/his camp haven’t necessarily been thrilled with various programs’ inconsistent recruiting of him as he considered whether or not to reclassify. They may also expect that with his ranking more consistent interest from blue blood programs would come, but it hasn’t necessarily, at least not in the way they might want. Sounds like there might be a bit of difference between where they think he is now as prospect and his expected path to pro-ball and how coaches see him (a developmental player with huge potential). Of course nobody actually knows for sure and I’m just repeating what I’ve read here, but it does seem like something is going on based on multiple recruiting folks insinuating it.

Aside from that, I think it’s worth remembering that most of these guys don’t view the program like fans do. Seeing us crush Louisville is good - and it’s great to make those impressions - but that’s probably not going to weigh on his decision. He is thinking about best path for development, playing time, path to pros, among many other things. We know Tony is great developer of talent and fantastic coach, but there are many other paths for prospects to consider and not all will want our path. Maybe he ends up deciding we are the perfect fit, but maybe not.

Thanks @MaineWahoo…Things sound a bit hazy with the whole situation, but I do now remember reading some of these things, and seems like you summarized it perfectly. Hoping it works out with Reed…He’d be a great addition to the team.

Did I read somewhere that Trey Kaufman was considering a trip east, on his own dime, to visit UVa and UNC? And, anyone please correct me if I am mistaken, if he does so, he won’t be able to meet with coaches. These visits will be to see the schools and check out the academic side of things. Given his self proclaimed nerdiness, this kind of makes sense to me.

Did I read somewhere that Trey Kaufman was considering a trip east, on his own dime, to visit UVa and UNC? And, anyone please correct me if I am mistaken, if he does so, he won’t be able to meet with coaches.

I don’t know if any of that is planned. You have the situation right though…probably. The NCAA still hasn’t officially announced a September recruiting calendar. I assume it’ll continue to be a month by month dead period extension for a while. He could visit like any other potential student. Just no in-person contact with the coaches. In-person being the key. He could be on his phone face timing with Bennett throughout. A lot of football recruits are doing it.

HGN, do you think that Gregg is a take at Oregon right now?

I don’t know anything about their recruiting but I wonder if they want a decision from Bittle first. Different players and positions, obviously, but I imagine there could be some overlap in the Ducks’ offense as both are more perimeter oriented bigs.

I think when we played Oregon they started Prichard and 4 6-9 guys. They may not play with normal positions.

Karl! Nice to have ya hanging out with us. I assume Oregon would take him. I just don’t think they’re all that enthusiastic about it. They’ll get Bittle. And he should be a one and done so it doesn’t impact other guys that much. But there are bigger fish at forward they have their eye on like Caleb Houstan that they wouldn’t have room for with Gregg. They need guards too.

HGN, going off of Karl’s question, do you think there is a similar situation with Duke and Keels? Do the recruitments of Houstan and Baldwin effect whether or not Duke would even want Keels? I think in another thread tu mentioned that he saw Houstan as more of a guard. I know you may not know much about Duke’s recruiting board but I’m just trying to look for something positive lol.

Doing some process of elimination, UVA is likely Gregg’s most attractive suitor at this point. Believe he’s got games this weekend and things could move quickly after.

Oh yeah Duke would definitely take Keels. Houstan’s issue is defensively as a guard. He’s fine as a 3 against most lineups, not all. He and Baldwin are very similar. Duke is more willing to play lineups that don’t make sense defensively. Think like that jumbo lineup they went with us a couple years ago where they just switched everything and dared our guards to beat the bigs in isos with a short clock. So yeah they’ll try for both those guys, just don’t see it being agreeable to Houstan with his other options.

UVA is likely Gregg’s most attractive suitor at this point. Believe he’s got games this weekend and things could move quickly after.

Reminds me of Corey Kispert a few years back. He was determined to decide early. Came on an official visit without an offer. So they sent I think Ron Sanchez up to see him shortly after during an April live weekend. He played for Joe Harris’s small time AAU program Friends of Hoop. UVA passed on him… He went to Gonzaga, probably would have anyway.

Thanks! I figured it was time to register instead of lurking and pestering you on Twitter.

Gregg, to me, is interesting. I don’t think many fanbases would be excited to get him. And I know you mean the Oregon coaches. And we’ll have our share that are happy to have him because he’s clearly skilled and we have a great development track record. But he’s not going to wow you with his highlights although the shooting and passing clips are nice.

I guess this is the longest, least direct way possible to ask you, and everyone that’s watched him enough to have an opinion, if he’s a redshirt candidate. I’m pretty sure that I would shirt him.

not HGN but I think redshirts are for mostly if they have any glaring physicality deficits that Mike Curtis can work with the player on for the year or if there is a lot of depth ahead of the player and they won’t play anyways. I dont think the staff ever force a player to shirt though, it’s the players decision.

Ben Gregg is a top 100 kid who in the past beat out Bittle to be the Oregon Gatorade player of the year. He might be a redshirt candidate just because of Mckoy and Murphy at his position and he needs some more work on his speed and mobility but he would be a great get. In all of his interviews Gregg has alluded to “whatever programs is best for me for the next 4 years”. He sees the big picture. He has amazing vision for his position. Imagine him passing to fellow ACC level players as opposed to his current high school teammates after his skills catch up to the ACC level

Yep…it was McKoy and Murphy waiting in the wings that have me thinking redshirt. And I still think Shedrick isn’t a 5 all the time but that may be wishful thinking with the move towards smaller lineups across all of basketball.

And yeah, Mike Curtis can work some magic during that redshirt year.

How are Gregg’s handles? His height and skills could be a real asset in press situations if his handle is tight.

I think his offense is fine and of course will improve.

My questions, with anyone who is 6’7/6’8, is who do they guard? That’s what Im interested to find out and of course its different player to player

They wouldn’t be going into it with the plan of redshirting Gregg. Sometimes numbers lead to that anyway.