Enigmas Wrapped in Riddles (Languages & Cultural Differences Around the World)

In my military schooling, I had to take a class in cross-cultural communications… even so, the different complexities in communication between cultural areas around the world is still an enigma and extremely difficult. Subtleties in gesture, inflection and facial expressions are the mother of the cultural snafu and language dialect differences can make a fool out of you quickly.

My kids go to a British state school in Germany… So many different words for different things… it really blew my mind when living there. My kids use them all since they go to British school… some of my favorites: Khaki in the UK means shit pants… they say Kharki Fanny is a women’s privates… so they say Bum Bag instead of Fanny Pack Spastic is a bad word… old lady smacked me for it in a pub one day Rubber is eraser… so my kids always ask me if I’ve seen a rubber Dummy is the British word fo…

I’ll do another 10 later… also will have to start my Germany version. @DFresh11 needs to do a Brazilian one, @BDragon will need to do an Irish one (I have some, but not a lot).

Wait until I do my Iraqi one from my year in Baghdad during the war… the world is insane but also unique and amazing all at the same time. How in the world in Star Trek can everyone on the planet Klingon just speak Klingon? That, not the rest of the science fiction stuff, makes it completely unbelievable.

Being made “redundant” just sounds so cruel. Like, not only do you lose your job, you gotta be told by some mid-level HR toadie that you are literally duplicative of some of other schlub.

“Sorry, you are exactly the same as Jane from the Stoke-on-Trent office but she does better office banter and doesn’t microwave fish for lunch.”

So true brutal way to find out you are no longer needed. Also great pull with Stoke on Trent home of 2017 WSM Eddie Hall.

To fill @jazznutUVA request let me see what I remember from Ireland, some of this will be muddle thanks to playing rugby with too many internationals and for fun and games I may throw in some poly talk as well for my islander fam.

2.Black stuff = Guinness “I’ll have a pint of the black stuff”

5.Give it out = When you have to get on/yell at someone. “I have to give it out to the boys after their shift last night cause they were slacking on the job.”

Lots more to come as I get more time.

This took me a while in the UK as well… but it gave me a headache when I got to Germany as halb Neun (half nine) means 8:30… since we hang out w/ British expats here as well… half nine is 9:30 to them. Been 16 years… still makes my head tick trying to get it straight.

One kinda weird thing is in Brasil I easily can do metric system with weight and distance etc and of course temperature. Impossible for me to use it in the US for some reason. Weird

I easily can do metric system with weight

I have no idea how tall my kids are in Imperial… just cms due to EuropaPark ride height restrictions.

Funny how that works

Also on doors that say “push or pull” the word for pull is “puxar” pronounced “push R” so for first few months Fresh always pushin in the door to my beera store instead of pulling. Doh!

How about in Hungary where shaking your head is yes and nodding is no… but when they speak to Americans they understand that it is backwards, so sometimes they will accommodate and do the Western versions.

My kids’ piano teacher is Hungarian and teaches them over webcam… he has issues with this… so do my kids. Hahaha!

Even if you look around the US, American English has a ton of regional differences.

In Tennessee we always said : what kinda coke yall got?

Even if you look around the US, American English has a ton of regional differences.

My favorite US dialect one… in chart form… w.t.f. Mississippi and Alabama… Devil Beating His Wife??? 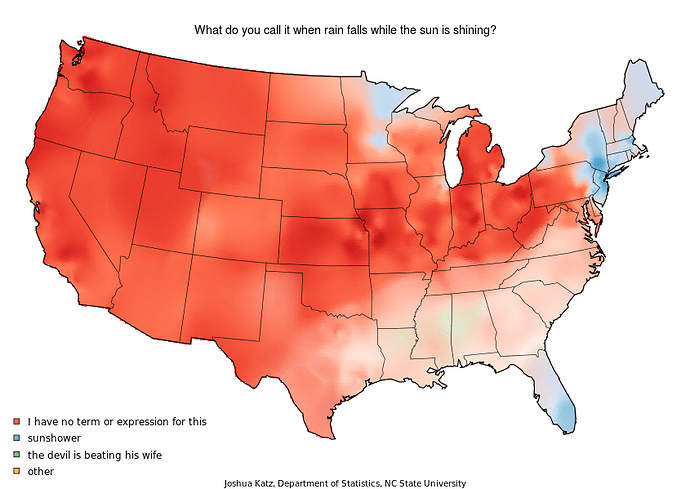 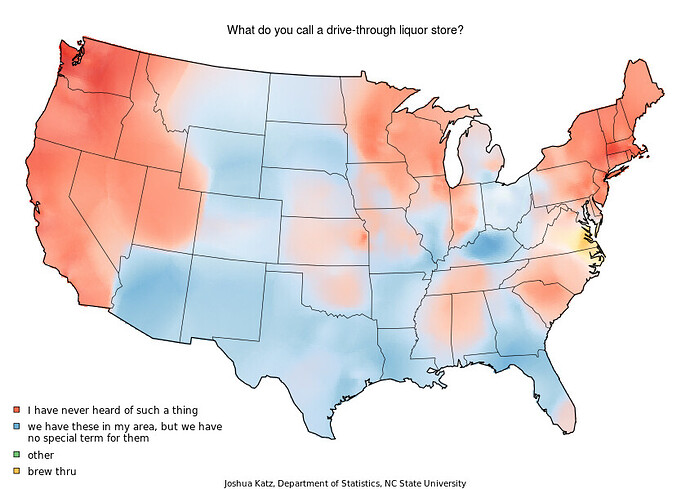 In Tennessee we always said : what kinda coke yall got?

For you @DFresh11… Tennessee is solidly in the green… “coke” 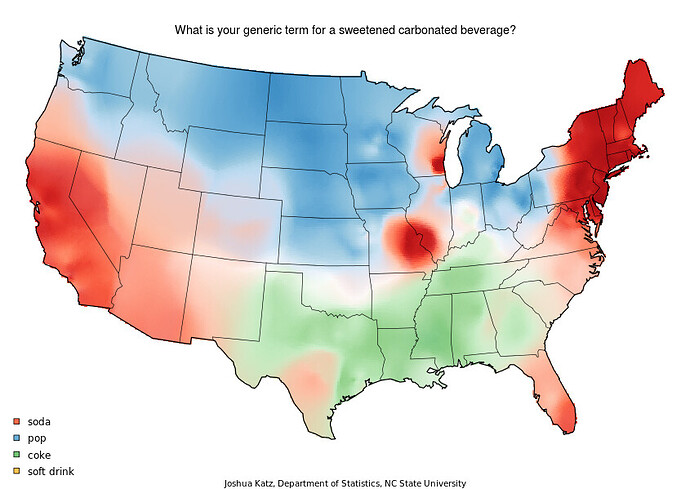 I remember the kids in high school would wear brew thru T-Shirts all the time. Those and the Big Johnson ones. Can’t imagine schools let kids wear those now.

Those and the Big Johnson ones.

The Big Johnson one I remember the most… Big Johnson Bar & Pub - Liquor in the Front, Poker in the Back… yeah, wouldn’t fly in today’s society. LOL!

BruThru shirts were everywhere in HS. Funny cause when I went to college at X Ohio had drive through liquor stores everywhere.

If I hear someone say pop I automatically know you aren’t from my neck of the woods. Gotta be a midwest to NE thing.

Also if you ask for a soda in the UK, you will get soda water plain.

@jazznutUVA we had a huge talk about the Devil Beating his wife thing at work like my 2nd month on the job was with my boss and our VP. We’re all spread out around the country and my boss from NYC but living in Bama was trying to figure out if I had heard that term before. Mind you I work at a very liberal non-for-profit where we are very careful about what we say and how we reference people. Dragon had a little sweat going as I tried to figure out if I should say it or not.

What I’ve found while not getting too political…

If you identify as Democrat or Republican… I cannot have a rational conversation with you as the issues are just a team sport for you.

If you identify as liberal or conservative… I can have a rational conversation with you as we can civilly discuss our differences even if we agree to disagree.

Actually like that breakdown. Might start using that and taking it a step or two further. For what it’s worth I believe polarization is most detrimental thing happening to western society. All the other stuff goes through the filter of that and comes out goose sh%t.

I worked a road construction job in Caswell County, NC (just across the border from Danville, VA) the summers after my first and second years at UVA. Dudes on that job site would say that every time it rained when the sun was out.

Those NY Times accent visualizations are fun. Regional dialects are probably declining but interesting to know that “sunshower” was mostly a NY area thing. There was another random one that was mostly in the tri-state area. Maybe “on line” rather than “in line”?