I think you guys are going to love this one. For those that remember him…it’s rare to hear him speak candidly like this. And for those that don’t know his story. Went from unranked recruit to all acc his first year.

It was an honor to talk to hoops with him: 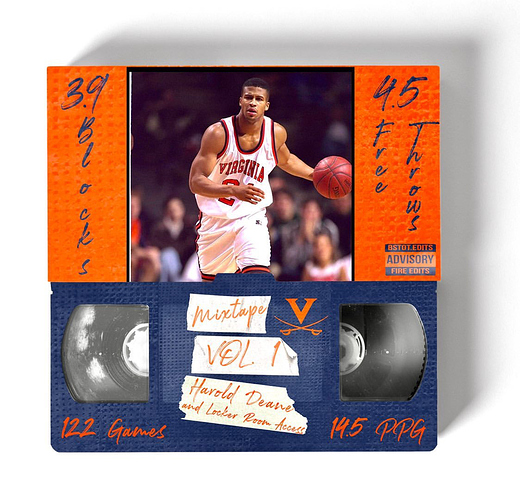 Harold Deane was an under the radar recruit who came to UVA in 1993 to stay closer to home. His entire trajectory as a player changed when Cory Alexander went down with an injury in game 1 of his career. Harold went on to become one of the best...

Harold Deane was amazing…love the way he talks too.

Great to hear from him. His 4th year was my 1st year… so I followed him closely.

Great interview. Harold Deane is an absolute treasure and reps South East Va the right way. Tell Mark aint nothing wrong with being country that’s how we roll in Va.

BDragon, I am NYC but know that I have a deep appreciation for southern hospitality and value the relaxing environment.

Thanks much for listening.

I missed playing with Deano by one year and its probly a good thing for me cause my minutes woulda gone waaaaaay down assuming Cory never got hurt. Have never seen a player arrive at Virginia as prepared as Dean was as a first year and we all appreciated how thoughtful his answers were on this pod…

No doubt he was thrown to the wolves and hit the ground running. I totally forgot he spent a year at FUMA. The extra prep time definitely paid dividends.

No doubt you’re love for Va is absolutely apparent and appreciated. But I couldn’t let a NYC guy pass without a little ribbing.

As a non alum, prior to Harold Deane, UVA was the team I rooted for because I liked sports and they were the only nationally relevant school in VA (sorry hokies.) There came a time however, when they became “my” team. A team a followed with a passion. I was excited for games. Thrilled after any win and dejected after a loss.

It was the Deane, Robinson, Staples team that did that for me. Harold played a big part in my UVA fandom going “next level.”

I’m also man enough to admit that those guns and the occasional angry glare were a little intimidating.

I have some stories about Harold and Cory era. But do me a favor and ask them about Michael Evans from Booker T Washington in Norfolk. He was the number tu point guard behind kidd and he did kidd dirty in DC. I won’t share more but he committed tu UVA. He would have been our best pg ever!!!

@TUGARD. dude. I talk about Mike Evans until this day! have never seen better including playing against Anfernee Hardaway

Deane was awesome! This is my time period!

I knew you had tu know Doug. Now he was coming tu UVA when Cory and Harold was there. Do you know how they felt about MIKE MIKE? Mike didnt care who was at UVA.

I wish this board wasnt public because I have stories. LOL. GO HOOS

He was the best HS player I ever saw

I havent listened tu Jamal podcast yet but he made a mistake going tu UVA. He needed an open court offense. Jamal should have been a pro but he also didnt put in the work. But put him at Georgia Tech, UNC, Syracuse etc. Jamal would have killed. I remember when he played Rice HS. OMG. Alright back tu the bat cave. I