Figured we are due for a new football thread with the season quickly approaching. What are people’s feelings thoughts etc? 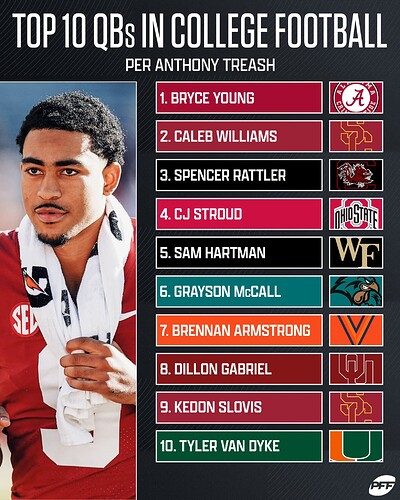 A) You never ever know how easy/hard/long the transition of implementing new schemes will be.
B) Defense will be better, not saying much I know, but it will
C) Still, it won’t win us games, we’ll need to be 30+ to get W’s
D) Season rests on the trenches, esp the OL

Lol at Spencer Rattler being at 3. I’m not sure how the writer is justifying putting him there.

Also the correct answer. Right team terrible ranking even for an opinion piece.

Rattler looked erratic on his best days at the helm at OU. Absolutely get the vibe of good athletic struggling to make the transition to the next level. Can’t imagine it gets easier at SC running away from SEC speed and schemes.

What are people’s feelings thoughts etc? 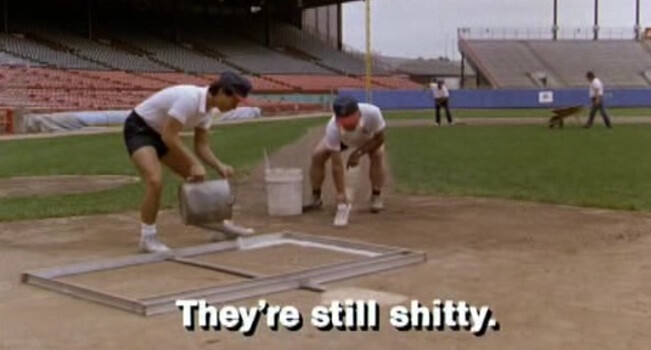 Over under on weeks in the top 25?

What odds would you give me with a 0.5 and I take the over?

oh man I gotta think on that. Great question. .5 weeks would be a long shot I believe.

I know a lot around here point to the strength of schedule as a reason to be optimistic, but I’m landing somewhere between @WFS_HOO and @Foresthoo. Lot of work to do done with this team. Last year’s team was not as good as the record would make many believe. Armstrong having a 2nd straight banner year in a new system is unlikely. Meanwhile the defense could improve 10X and still be ranked outside the top 40 nationally.

Oline may actually be worse than it was last year. Which is scary. They were serviceable at best.

I try to hold out hope that the oline issues/rushing game problems were scheme related, but I know there’s only some much the X’s and O’s can fix when you don’t have the Jimmy and the Joe’s.

Given the favorable schedule, eight wins is feasible although probably not the most likely outcome. A lot will depend on whether the OL can keep Brennan healthy and the defense can improve to at least be average. I’m more confident about the latter than the former. My heart says we’ll start 7-0, lose to Miami and UNC, then beat Coastal and VT and go to a good bowl. My head says we’ll lose at least two of our first seven “easy” games and then struggle to pick up another win (with a loss in Blacksburg virtually guaranteed).

Glad somebody said this first. That game in ILL looks suspicious to me. Seen this movie before.

Funny the more I look back on last year’s schedule the more shaky I become about this year’s schedule. It doesn’t take a stretch to see that team going 4-8 with 4 of those losses not even being competitive (I refuse to count the track meets of BYU, UNC, Wake as competitive). The floor may be lower than I anticipated.

Lot of people rated our OL best or 2nd best in the conference last year. Which I think speaks more to the rest of the conference, but starting 5 redshirt seniors is also a huge advantage.

I’m hoping to make a bowl game. OL is gonna give me heartburn.

Yeah, last year’s OL was tolerable at run blocking but were actually decently solid at pass protection (which makes sense since they got a lot of practice at it) which probably made them the best OL UVA has seen in at least 5 years and probably longer. Which made it easy to forget just how bad the OL has been in recent years and how bad the crew could be next year.

If last year’s OL was magically returned to this year’s team, plus a smooth transition between schemes, it would make me feel comfortable about an 8-win season. But if the OL doesn’t gel and the scheme transition isn’t smooth, the floor is low. Yes, we’re returning an all-world QB and WR corps, but last year showed that combo (plus a decent OL but absolutely nothing else) was good for a .500 season. If we take away the decent OL and change the scheme, the potential range of outcomes is really wide even against a weak schedule.

I don’t disagree. There are a ton of unknowns with a new staff bedding in which means a huge amount of variability in potential outcomes. I’d rate Richmond and ODU as highly likely wins, Illinois, Cuse and Duke as likely wins, Louisville, GT, Coastal and VT as toss-ups, and the rest of the games as likely to highly likely losses. It’s quite possible that we could lose all of the toss-ups and even one or more of the games where we’re favored. On the other hand, I’d say it’s equally possible that we win the majority or all of the toss-ups and even one of the likely losses.

Love that breakdown @ElliottHoo Think you nailed it about the Oline. When I think of them being subpar it has to do with their ability to run block. I also think BA’s ability to scramble and buy time helped the passing game, and I’d rather that be minimized or created more through scheme than improv.

@TheVanillaGorilla I can’t disagree with your assessment either. Having not done my complete research on the upcoming season I don’t have a feel for those toss up games other than they could go either way and given that it’s a new staff and a new scheme I can’t hedge my bets just yet. Under Bronco, London, late tenue Groh, I knew those toss ups were likely losses thanks to poor execution and bad game management. Not sure about TE just yet.

I’ll be honest, I have no idea why all the optimism. We have two very good position groups (QB and WR are very important yes but BA ain’t Superman) and pretty mediocre every where else, or we think we know more than the experts at the position (RB). Defense is “we can’t possibly be worse” and OL is all unproven.

I love Elliott and I think he’ll be great but it’s his first season so there will be dumb losses. I think we’ll go 6-6 and be frustrated but hopefully for the future