Hey all, I’m going to be doing a series of blog posts over on the LRA blog throughout the season checking in on Virginia players in the NBA. Since the preseason is pretty rapidly approaching us (we are officially one week away from the first NBA preseason game) I put together a little season preview for each guy in the league this year.

Did some deep dives on Trey Murphy’s ideal role in New Orleans, how Ty Jerome fits with a rebuilding Oklahoma City team, Joe Harris’s big opportunity with the title-contending Nets, Malcolm Brogdon’s shot at the All-Star game, and De’Andre Hunter’s potential breakout season. I also provided a brief update on where some of this year’s summer-league guys (Mamadi, Kyle, Huff, Hauser) might end up with their respective teams.

I’ll be threading my posts, which should go up every few weeks during the NBA season, in this topic.

Happy to discuss any of these players and their outlook in the comments — I’m a huge NBA junkie and would love to talk some ball. 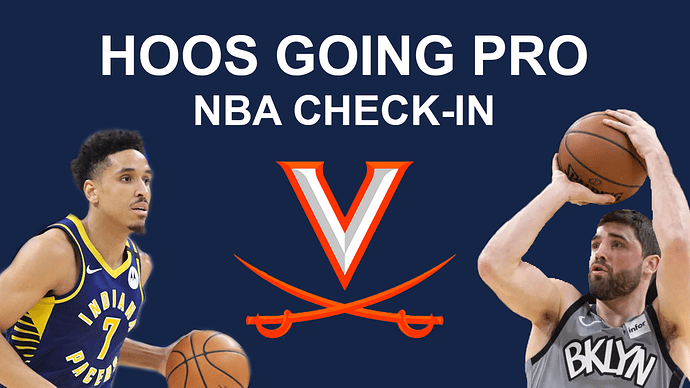 A preview of each Virginia player currently in the NBA summarizing any recent updates and analyzing potential roles for the 2021-22 season.

I still think if both teams are fully healthy the Bucks win that series, because Giannis was dealing with injury as well. But Dre would have been a game changer — having an iso scorer who wasn’t reliant on Trae’s playmaking would add a dimension to the Hawks offense that they were really missing. And it would’ve been awesome to see him show out in the ECF. We all know how good Dre is in big moments.

Does Justin have any thing going on? Looks like he’s training hard but he’s not on any camp roster that I’m aware of.

we need the @hoopsandhoos vs @brogdonfanpage One on One game livestreamed

Zach would probably just post me up. But if my shot is falling I bet I could give him a run for his money.

Things are looking good for Trey Murphy headed into the season in New Orleans. From the Pelicans beat writer for the Athletic, Will Guillory:

For the other spot on the wing, I’d be shocked if Trey Murphy III isn’t given a legitimate shot to nail down consistent minutes at the start of his rookie season. He played with immense confidence during his time at the Las Vegas Summer League, and he’ll bring a blend of size and shooting that was nonexistent with the second unit last season. His spot-up shooting alone should be enough to ensure he’s regularly featured in those Zion-led bench units.

Seems like he’s going to immediately see some signfiicant playing time. I still would be really surprised if he doesn’t end up starting by the end of the season. Trey is just that good.

Malcolm Brogdon is taking a leadership role on the Pacers, as we all probably could’ve guessed. From Pacers writer Bob Kravitz —

At the end of last season, a challenging and unhappy season filled with discord and pandemic-related stresses, Pritchard said he was looking for someone to take over the leadership role for his team. He didn’t know who that might be at the time and noted that if nobody embraced that role, he might have to make changes to the roster.

Early on, though, it appears Malcolm Brogdon has taken the reins.

Prior to the season, he organized a multi-day trip to Los Angeles, where his teammates played basketball, shared meals and generally reestablished connections that were frayed, or lost altogether, during last season.

We’ll see when the going gets tough, as it most assuredly will at some point or points this season.

“I think Malcolm is the natural guy and he’s taken the reins early in the summer (and more recently),” Carlisle said. “Hey, look, we’re going to work through all those things. I’ve talked to Malcolm a lot about leadership, his role as a leader, and as a head coach and as a staff, we’ve got to create the right environment for our guys to lead effectively. Malcolm’s been the guy who’s been out front with this.”

Carlisle & Brogdon will be quite the UVA duo to root for this season — the Pacers should probably be the team of choice for Hoos fans, especially because Indy also gets its share of “too boring” criticisms

Love what you bring to the site @hoopsandhoos glad you’re part of the team!

“He was a champion (at Virginia). He knows what it takes to win.” De'Andre Hunter and his road to recovery: 'I want to show everyone I'm better...

After two meniscus surgeries in a year, Hunter and those around him see "no concerns" as he enters Year 3 with the Hawks.

Solomon Hill, whom Hunter calls a big brother, believes that if Hunter were healthy, the Hawks possibly could have won the title. Hill isn’t the only one who feels that strongly about Hunter’s importance. Throughout the Hawks’ postseason run, multiple players mentioned how having Hunter on the floor changes things. That’s why everyone in the organization is hoping that Hunter’s 19-game stretch before his first meniscus surgery was just the start of a promising career.

“He’s self-motivated and self-driven,” Hill said. “He’ll come out here and miss some shots and be more mad than anyone in the gym. He’s just a workaholic. He was a champion (at Virginia). He knows what it takes to win. What he was able to do for that first quarter of the season, he was probably one of the most consistent players we had on the court. Defensively, he’s locked in. He’s no bitch on the defensive end. I believe in him and Cam (Reddish) as two-way players. I love ‘Dre. I know what he can do out there. I believe if we had ‘Dre, our chances are through the roof.”

Seems like Solomon Hill agrees with @haney about Dre being able to get the Hawks past the Nets. What’s funny about this quote, too, is that if Dre was healthy & playing, the player to get dropped from the Hawks rotation probably would’ve been… Solomon Hill.

They’re gonna need at least one Net injury, or whatever is going on with Kyrie to keep going on with Kyrie, to make it interesting, and really hope Dre stays healthy (which we know can be a rollercoaster) and keep Trae fresh enough, but yeah, it will be fun.

I always say “this is the year I will follow the NBA regular season” and then I tune out after a game or two until the playoffs, so I won’t make that vow this year, but it’s nice to see there are some story lines in the East frankly, not the least of which is that both NYC teams are actually worth paying attention to (I say as a selfish NYC-based fan who may actually get back in an arena next spring …)

(also seems to be an indication that, as I mentioned in the preseason preview, Mike Scott and Justin Anderson aren’t currently with an NBA team)

Yeah, I think Mike Scott’s days in NBA may sadly be over. He hasn’t shot well for a while now and I think most teams would rather gamble on younger players at this point. That said - you never know. Could be brought in as a locker room glue guy type on a team already spending a ton of money elsewhere. But wonder if he’ll opt to go overseas or hang it up.

Justin is the one that is still a big mystery to me. He’s seemed more active here on LRA but also seems to still be working out. Wonder if he’s hoping an NBA team with a hole or injury calls him up at some point or if he’s plotting something overseas. Very curious. Hoos making their preseason debuts for 2021-22 tonight and tomorrow:

ATL @ MIA: none (De’Andre Hunter is on ATL but expected to sit out some preseason games due to his knee injury; should be good to go for the regular season).

CHA @ OKC: Ty Jerome and Mamadi Diakite should both see some pretty significant run for OKC in this game. It’ll be interesting to see if Diakite can cement a spot on the team’s final roster this preseason.

ORL @ BOS: Sam Hauser for the Celtics should get some playing time, especially if Boston is smart and rests Tatum/Brown.

IND @ NYK: Brogdon will probably play at least a few minutes for IND, though it wouldn’t surprise me at all if they rest him at times throughout the preseason.

CLE @ CHI: Kyle Guy could see the floor for the Cavaliers (not our Cavaliers), though his PT may be limited since CLE has lots of other young guys at his position (Sexton, Garland, Windler) that they might want a look at as well.

WAS @ HOU: Jay Huff and Anthony Gill are both on the back end of the Wizards big man rotation. Huff should see some PT, because he’s contending for a two-way spot and the Wiz will want to see what they have in him. Gill should also get a shot, especially if the team doesn’t need to see much from starting PF Davis Bertans (they’re already thin at PF with Rui Hachimura away from the team for a personal matter).

MIL @ MEM: none (Milwaukee’s still in the doghouse for waiving Diakite & trading Brogdon)

My viewing recommendation from a UVA perspective would be to tune into the Hornets-Thunder, Pelicans-Timberwolves and Wizards-Rockets matchups (I’ll miss some of the games tonight because I’m covering the Sixers-Raptors game). If you have a chance to watch, preseason is always fun because young players get extended run; if you don’t, it’s NBA preseason, who cares.