With the NBA back to meaningful games, figured we’d start a new thread.

Today, Justin and Joey tipped off at 2:30 against the Magic and are playing now on the NBA League Pass.

The Suns and Ty are about to tip off against the Wizards, also available via league pass.

Then at 8, Kyle and the Kings play the Spurs, once more, on League Pass.

I’ll be doing my best to cover their performances, both here, on my twitter page (@zach_carey_), and via blog posts. First up, I wrote about what the expectations are for the guys tipping off today in the bubble: 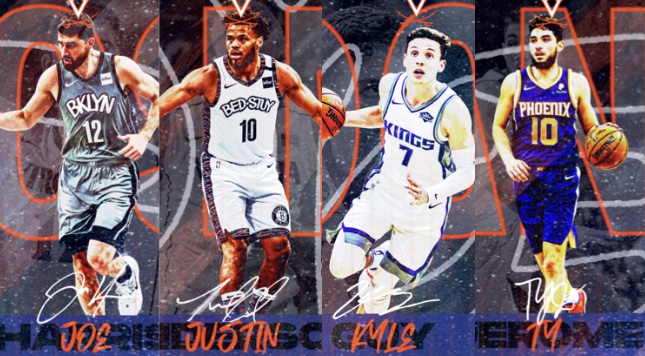 What are the Expectations for the 'Hoos in the NBA Bubble? (Part 1) - Locker...

Following a week or so of scrimmages, the NBA has officially returned to playing meaningful games. On Thursday, the Pelicans, Jazz, Lakers, and Clippers kicked off the NBA bubble seeding games. Today, a number of other teams kick off their eight...

Three minutes left in the game, Joe has checked out. Finishes with 14,4, and 2. Justin has been in throughout the fourth quarter. He’s still scoreless but has 3 rebounds, 2 assists, and a block in six minutes. With two days of meaningful NBA games complete, the remaining Wahoos in the NBA bubble are going to tip off later today. On Friday, Joe Harris and Justin Anderson saw their first action in Orlando, while Kyle Guy and Ty Jerome are still waiting to...

I really love Brogdon, but it feels like he is hurt all the time. Hope he has a season or two injury free at some point.

Mike Scott isn’t playing either due to injury and Devon got zero minutes earlier today in a blowout. Despite so many Hoos in the bubble… this kind of sucks.

Agree so many nagging injuries robbing him of greatness. Likely woulf have been an all-star this year if he wasn’t hurt so much

Thought the same thing I’ve watched a ton of NBA ball in the bubble and havent seen a single Hoo. Even in some massive blowouts

Issue for new roster guys like Devon and Kyle is that there aren’t enough active gameday spots. Both of them have been inactive. Then, unfortunately, Ty seems to have lost the backup pg battle in Phoenix.

For Malcolm, I think next season the Pacers ought to start purposefully resting him a la Kawhi. I hate it, but yea as y’all said the nagging injuries have really piled up this year. Along with contracting Covid, which is obv different, he’s dealt with a whopping 8 different injuries.

At least we have the Nets with Harris and a little bit of Anderson. But given their lack of depth, they may be torn limb from limb by the Bucks in the first round of the playoffs. I’ll be happy to see our guys get some minutes, but it might not be pretty.

Ty got a rae deal in Phoenix with them bringing in 4 pgs this year. It was always going to be a struggle.

Hall and Guy not playing makes sense. I thought Guy may get some run having been in the dev team for a bit.

Reseting Brogdon may not be a bad idea. He obviously has the skill set just needs to get healthy. I thought the 4 month layoff would do him good

LOVE the court side view ESPN is using on occasion. Wish they would use it more often. I love how it gives you a true sense of the actual spacing on a court that you don’t get from the traditional broadcast view. Really brings home the skills of the players. Y’all agree with this? I think there’s an argument to be made for us being the Pacers, at least pre-Natty…

I just think in regards to guys like Ty, Devon, Kyle, etc., they need an extended chance. Nobody can be consistent when given a minute or two every couple of months. It’s crazy. You see guys getting minutes that don’t have the skills we know these guys have. It’s a crapshoot. Some guys do well in their 30 seconds and some don’t. I find it frustrating as a fan. If you invest a 1-2 round pick on a player, give them a chance. Usually those clubs don’t have a chance to win. But they do have a chance to set the new guys up. Those that don’t, it’s a sign of a bad club in my opinion, or a short sighted coach.

Celtics: Defensive minded. Bigs who buy into their roles. Low scoring games (relative to the rest of the NBA)

Joe and Justin play the Wizards at 2. Kyle and the kings play at 6. Suns and ty play at 9.

thanks yo. you guys are legit my tv guide for this stuff and I appreciate it

Joe is going off right now. Has 27 points with six minutes left