Is Gus Gerard the best player to leave early? 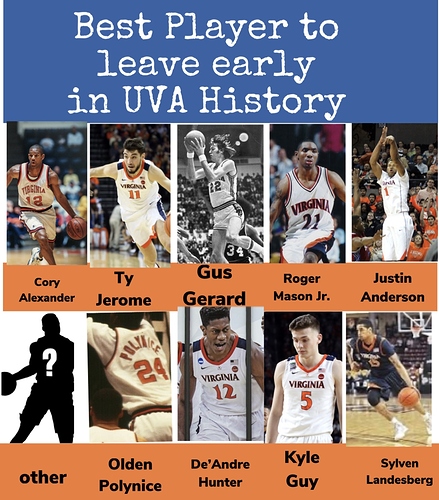 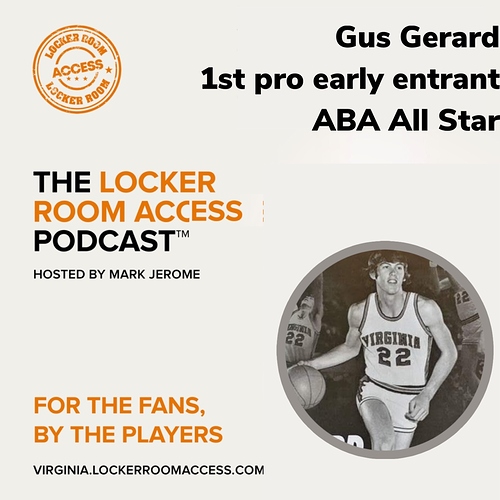 Gus Gerard, 1st UVA player to leave early for the League, his battles with...

Gus Gerard is probably the most talented UVA Player in history and most fans have not heard his story. Sit back and listen to one of the all time ABA greats talk about being the first UVA player to leave school early for the pros in 1974. Playing...

Deandre. In an age when most early entrants are “raw” and need polish and practice, he was a cut diamond. He was extremely efficient on both sides of the ball and rarely made mistakes. Our 2nd highest draft pick ever, he was drafted ahead of his next two strongest competitors for the “best player to leave early” award.

wonder where Dre would have gone if he left the year before, which be could have. I was at that ACC Tourny in Barclays when he broke his wrist sitting by Goldman States GM. I asked who he liked the most in the ACC tourny: Deandre Hunter with no hesitation

He was on a whole Other level.

hahhahahaha. He was unreal. Took me maybe a minute to get that one

Great question. Even with the broken wrist i was hearing me as a low lottery still a first rounder

Gus had 39 pts/18 rebs in his next to last UVA game against Clemson & Tree Rollins in first round of ACC Tournament. He averaged 16 & 8 his first season in the ABA.

Dre is not a clear cut best to leave early for me. Gus was a very assertive player, something that wasn’t always Dre’s strong suit. Hence, when Ty would remind him how much he liked “aggressive” Dre.

Olden Polynice left early, too, and had a long, productive NBA career. Many believe if Olden was not forced to leave school early, UVA had its best shot to win a natty since Ralph’s ‘81-‘82 team.

When Gus played, no one hardly left early. Spencer Hayward in ‘68 was the first. If anyone left, it was after three years. The teams were more mature and at a higher quality of competition than today’s college game.

@Mikeysurf I have said that over and over. Back in those days there were 4 to 8 NBA players in EVERY ACC game. And with juniors and seniors all grown men. Love this post and insight especially since it says what I always try to convey.

Doug, the talent on the floor back then was crazy. It wasn’t just these guys were future pros, but #1 picks facing off against each other. And it happened a lot. It’s what made the Ralph-Patrick game such a hyped affair. But during the same time Patrick faced off against Worthy, another #1 pick, as well as Jordan on the team (a #3 pick). Patrick played Hakeem in ‘84 finals, two #1 picks.

And less teams made the NCAA Tournament that made regular season wins more valuable and every game relevant.

I remember the Championship game in 85. Villanova couldn’t miss a shot. I was sitting here driving myself crazy trying to remember the name of the Villanova big guy but as I was typing the name come to me I believe. Ed Pinckney?

One other thing which has been left unsaid (I think) is that while Gerard is typically listed as a small forward, he was forced to play center in college. Every night he was matched up against the likes of Elmore, Kupchak, Burleson, and Rollins. Also, as an offensive unit, the 1973 starters (Parkhill, Hobgood, Drummond, Gerard, & Walker) may have been as good as any starting five Virginia has had which didn’t include someone named Ralph. Admittedly, they were far from the best defensive squad Virginia has ever fielded, and there was no real help to be found on the bench, but they could score. In fact, they beat UNC in Carmichael that year. And, I really wish there were footage somewhere of Gerard’s behind-the-back-between-the-legs dribble move he put on Rollins in that last game against Clemson.

I can remember watching Sampson go up against Worthy, Perkins, and Jordan in the same game. Didn’t appreciate the once in a lifetime opportunity in the moment.

Those games are treasures!

absolutely, not even close

The 87 team had some rumblings of being preseason #1. It was a top 25 team even without Olden. All five starters averaged double figures. Would have been top ten if not top five.

Man I just spent some time on a long drive and listened to the Gus Gerard podcast. One of my favorite players from the past now, guy lived an incredible life! Could really listen to him all day, he’s got such a rich recollection of stories and the people in those stories. Awesome podcast!

exact same for me. Watch the Free Spirit 30 for 30 about that team. Gus has a big role in the documentary as well. Dude loves talkin hoops and guys from his era all love him

Many thanks for doing this podcast. I was in high school in Charlottesville in the early 70s and a big BB fan. As I believe you attributed to Mikeysurf, Gus really was our version of Dr. J. Probably everyone who saw Gus on the court can remember a play in a particular game that was just mind-boggling - for me, it was a fake behind the back pass driving down the lane at UHall against UNC’s Bobby Jones. Froze Bobby Jones and Gus laid it in. That game was almost 50 years ago, and I remember it like it was yesterday.

Gus was a great source of history about those Bill Gibson teams. Loved reliving a lot of that. The story about his recruiting trip was great, and his love of Barry Parkhill is evident throughout. Enjoyed hearing about his ABA days and playing with and against some of the greatest of all time. He went through some struggles after basketball, but seems to have found his path in life, and it was good to hear all about that directly from him. Thanks again for this piece of Virginia basketball history with one of our great ones.