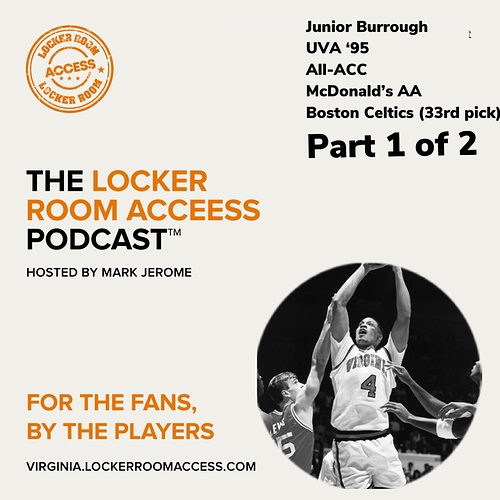 Junior Burrough on how he developed post moves, picking Oak Hill and UVA over...

Junior Burrough is a name we hear often on the Mount Rushmore of UVA basketball. He joins us for a 2 part podcast. What did he do to become such a great post player? What skills and what age did he start to focus on basketball? How he picked Oak...

Also the video portion is also up:
Watch part 1 of his youtube first impression here: https://www.youtube.com/watch?v=PmWiT6mkygM&t=29s

Anyone else hearing a repetitive tick on the audio recording? I had to stop listening after a few minutes because of it.

I just noticed there was a second version available that was uploaded 6 hours after the first one… so I downloaded that one and the clicking is gone.

Yes, good catch…i had to reupload it due to that clicking… 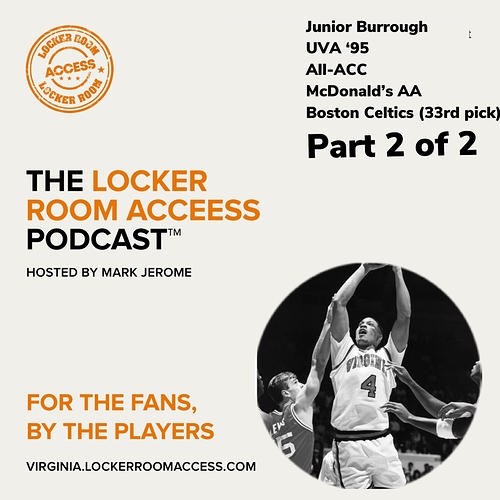 Junior Burrough on his first pickup game at UVA, What clicked for that ACC...

Part 2 of Junior Burrough’s podcast includes a variety of questions. What made the 1995 team so good? What he remembers about the 1995 NCAA tournament? What was his Michael Jordan Story? Converse vs. Nike. No Sleep on the road, His Mount Rushmore.

I need explanation on the no sleep thing. Did he go out in every city on road trips?

basically that. but June and that class were not into drinking and that kind of thing at parties. just liked hangin out

Really enjoyed the two Junior episodes. I can see why he’s Dougs favorite teammate. I wish they had cameras in the locker rooms back then and we could see y’all eat the chitterlings.

man I am from the dirty south. love everything Frog legs whatever. I could not do the chitlins… even with Junes hot sauce. Junior and his family are all great people and man could he play basketball

Love that you liked it. Hope we keep gettin these guys on

I concur 100% I love all that dirty south cooking but i draw the line st chitterlings. Never been able to do it.

Hah i didn’t know it either until i saw them in the store and the container spelled it chitterlings. Ive never heard or seen that ‘er’ used before.

once again we are the same dude ha

Just wanted to say I really enjoyed these. While I’ve always had some general understanding of the history of UVA basketball before I became a fan (the up-and-down-but-mostly-down Leitao years) and seen all the names brought up repeatedly on various message boards, it’s been really great to learn about the history. I couldn’t have told you a single thing about Junior Burrough before listening to these podcasts despite being a pretty ardent current fan, but now am a huge fan of his.

One thing I will say though, somebody needs to go through some old game tape and put together some decent highlight reels for YouTube! As guys’ names have come up, I’ve gone to search for highlight packages to get a feel for their game. But with Junior, for example, I can mostly only find full single games. Same with guys like Jeff Lamp. Would be really cool if the Athletics Department could do that at some point, although of course understand they are working through a lot of other issues at this time. But at some point in the future, would be nice if they paid some students who are learning video editing or whatever to go through the old tape and put together some player-specific highlight reels for the old greats.

Appreciate that and that is part of the vision on LRA with doing the old school pods- plus is my personal wheelhouse and TW grew up on these guys.

We are working on the video stuff where we take VHS and make it digital to create highlights of guys etc. Stay with us!

Without saying tu much, im very aware of this time frame. I was so excited when they committed. They made UVA cool and brought flavor if you know what I mean. Ask Jr about VA Beach and Greak Fest? Anyway, they were no where close tu Michigan fab five. Lets be real. There go that word again. LOL Michigan went tu chips and should have one. UVA did start the cut up T shirts under the jerseys their soph or jr yr and they all had big arms. LOL. They had confidence and believed they could win. Im not sure Deane would have been Deane if Cory didnt get hurt. Deane probably dont play much that fr yr if Cory was healthy. I know Doug like reminiscing but I would have love tu hear more about Yuri, Norman, Curtis and others. Those teams had ballers and again I know some stories. Junior is by far the best big man I ever seen at UVA followed by one of my favorite Travis. But I always felt he could have been more focus. If he was just a inch or tu taller and had a reliable 15 tu 18 ft jumper. He would have been a 10 yr pro easily. Jr was unstoppable when he was dialed in. Out of the five players. He is the only one that lived up tu his ranking and he mention not having Cory. If we had Ben Davis who was so close tu joining the team or Jason Lawson, who shitted on us the last minute for Villanova. I think we would have earned a final four birth. We needed more low post scoring. I think Jeff Jones did a terrible job including Norman early in his career. We had perimeter players all over but nobody tu help Jr.

I forgot about Ben Davis. What was that story?

He went tu Kansas than Florida. Not my place tu share more. LOL

who on Michigan was better than Cory orJunior as a HS prospect. They were all crazy talented and our class brought that same swag in 91 People give Michigan credit for baggy shorts like that was impressive. Jay Willy YB CA June and Big Chris all did the same. hahaha. Love you tu much tu