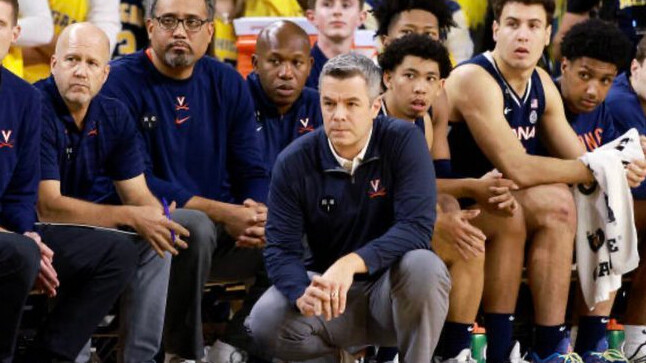 Lots of lineup talk in this edition of the Locker Room Access mailbag. Plus recruiting, a potential super senior, J Willy's future, and more.

Man we keep mentioning Jwilly replacing TB as if its like 2-3 years away versus 10 years away. I’m not liking this chatter.

Every job he doesn’t take, and this is no slight towards J willi, just makes me think that that time is that much closer. Don’t even want to think about it.

Now I am sure this thread will become post after post about how that’s probably the case, and Coach Bennett probably will want to do something different in life sooner rather than later. So, probably best that I go on and mute this thread now.

Not gonna lie it sorta feels like you did this one to yourself.

My guess is that TB doesn’t coach too far past 60, which is why I’m trying to appreciate the years we have him as much as possible while he’s still here.

Would be excited for J Will to get the gig after that, I know many would probably prefer someone with prior HC experience but I think Williford represents the best opportunity to keep our already strong culture and foundation intact.

Sorry Serum lol, I know this proves your point.

The excerpt about Armaan is interesting, figured the chances of him coming back for a 5th year were pretty slim. Would have to imagine he’s getting at least a little pro buzz given how he’s played this year, whether that’s for the NBA or overseas. Would love to have him back though.

The real reason we aren’t pushing for 2024 recruits is that this is Tony’s last season.

There’s some rope and a tub of wet cement otw.

That shit’s not funny

I could be way off here but I think Reece’s decision could have a big impact, and vice versa. Kihei, Reece and Armaan seem very close.

I think J Will is waiting for the right gig. And I think that’s more likely to be a lower tier power 5 school than a mid major. Boston College sort of gig.

I hope all three come back

nice read! I agree about JWilly & I hope we are correct!!

He must really be holding himself to leaving when Issac2 does

Well, this turned into a fun discussion.

My hope is that we get one more true contending season with Tony, as in one more elite level team. I think we can do it, and the pieces almost seem together to make it at least seem plausible (where’s that damn PG?). You never know how it all turns out, but I hope we get one more legitimate shot at a final four.

I want another FF and CTB to hit 500 wins. Just went past 400 so that’s roughly 4 more seasons

I think there’s a strong argument that K was the best college coach of all time. And while I had a great time despising and making fun of him, perhaps the most extraordinary thing about him was that even after 45 (or whatever) years of coaching he was still REALLY passionate about coaching and winning college hoops. All the stuff we make fun of… the over-intensity, throwing his pen, yelling at refs, his ridiculous faces, etc were all signs that he was doing the opposite of mailing it in long past when everyone would have expected him to start coasting. I’m not sure there’s anything I could do passionately for 45 straight years.

Anyway, the point is: CTB was never going to stick around for 45 years. You never know what the future holds and plans can change. We should at least have a few more years to appreciate him. And while it won’t feel like it was long enough, another 20 years wouldn’t have felt like long enough either.

I think the timing would just about work out for Ty to retire from the NBA after a really solid career, be an assistant for JWilly for long enough to learn everything, and then take over after JWilly hangs it up after his second Natty as HC.