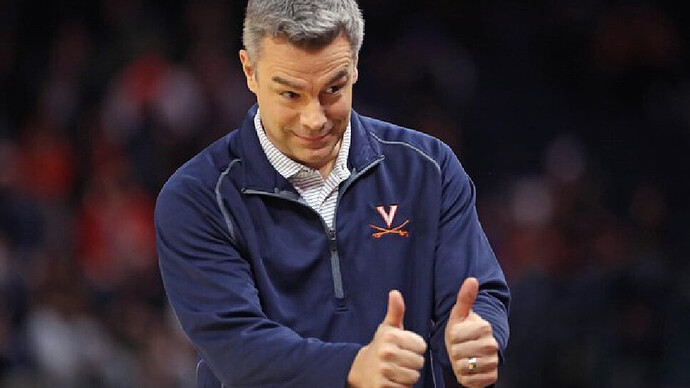 Lots of fan questions about the future makeup of UVA's roster in this edition of the Locker Room Access mailbag.

No questions about the 3 M’s playing time?! color me shocked!

I kid I kid. Great read

Honestly, the thing I’m most nervous about is ‘23 becoming a meh class and everyone saying “Well, with the ‘22 class already here, we were never going to be able to convince anyone great to come because of playing time concerns.” That’ll be a somewhat valid point, but if we want to rebuild this roster and get back to the top tier college basketball, we need to string together some talented classes and maintain some consistency.

We all love the ‘22 class (especially if London Johnson joins it), but it’s doubtful we hit on 5/5 guys. There are going to be misses or guys who don’t pan out for whatever reason, and we need to have talent to fill in for those misses. I hope the coaches can find a way to pull that off.

I think Isaac McKneely has a chance not only to play but be a difference maker next season. He has a bit of an advantage over most first-years in that his high school system is nearly identical. And he brings a skill that’s badly needed, shooting. He’s a good enough athlete that I expect he’ll adjust well too.

I did not realize that Poca (McKneely’s HS) ran a similar system to UVA. Another positive sign towards McKneely being ready to play when he arrives — definitely feels like he’s the most UVA-ready of the recruiting class at the moment. And his shooting is sorely, sorely needed.

Earning time in the frontcourt will be a little more challenging, but I’d bet on Isaac Traudt carving out a good role for himself too. It might take time for his full package to translate in college, but the way he can stretch the defense is just too valuable to keep off the floor.

Watching Traudt’s HS highlights is crazy. Dudes who are 6’10", can dunk on people, and regularly hit threes off the dribble and set threes from NBA range in high school don’t come around very often. I think I’m higher on him than most people; I would argue that he has the most upside of anyone in the incoming class. That being said, I bet there’ll be a decent adjustment period for Traudt (and all the other freshmen, to be fair) as he figures out the UVA system.

Also, McKneely is entering a pretty shallow backcourt rotation, while Traudt will be competing with Gardner (assuming he’s back), Papi, and Shedrick in the frontcourt. Dude’s too good not to play next year, though.

Welp, I just realized I typed all this out & came up with basically the exact same conclusions as HGN. That’s why he’s the expert

The issue I have is that we’re projected to keep 4 of our 5 projected starters, plus Shedrick. Does anyone think any of those 5 returners will see a meaningful decrease in minutes? And assuming the answer is no, is there reason to believe next season will be meaningfully better than this one?

I’m also concerned that we’ll have some unhappy guys. 50 minutes or so opening up with Clark and Statts leaving. Between the three Ms, and a 4-5 man 2022 class, that’s not much at all. It’s not like CTB is gonna split 50 minutes seven or eight ways. More like 3ish, with 2 winners and a third getting maybe 8-10 per game. The other 3-4 guys will be left out of the rotation.

I can’t agree that this team has quietly improved a lot over the course of the season. Where would I see that?

This team started mediocre and has stayed mediocre. The defense is getting worse, not better. The offense has been a bit more efficient over the last 10 games or so, but it’s 43 per Torvik, which is not exactly stellar for a gerrymandered stat.

This is kind of random, but I just noticed that our straight up and ATS results have been the same in every game since the JMU game. I think it’s 13 games in a row. I’m not really sure what that shows (if anything). The last time we won and failed to cover was the ACC opener vs Pitt.

I’m not really sure what that shows (if anything).

It shows that we are pegged more or less exactly correctly by the efficiency stats. (i.e., consistent)

EDIT - actually this isn’t quite right. I’ll have to think about this a bit. Or, perish the thought, do my actual job…

I did not realize that Poca (McKneely’s HS) ran a similar system to UVA.

Zach did a great job with this article back before McKneely committed. He talked with Allen Osborne, the Poca coach. 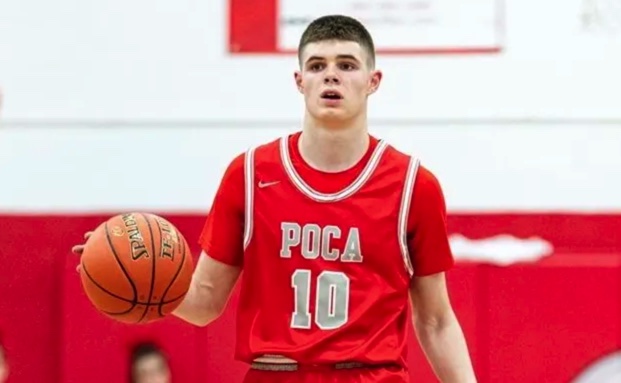 Isaac McKneely is UVA's premier recruit for the 2022 cycle. Out of Poca High School in Poca, West Virginia, McKneely is incredibly familiar with the UVA basketball program and their schemes. In fact, McKneely’s high school coach modeled his entire...

The ATS margin would be an indicator of how well the efficiency stats peg us. I didn’t think to check that.

And/or a higher hit rate on the Marco Anthony / Frankie Badocchi types.

That’s also good evidence against what I said above – that we are consistent. And I will do with that evidence, what cognitive dissonance demands that I do: I REJECT IT! Lol!

Great read. I have to say, however, that I’m surprised that you (HGN) didn’t put London as likely to play a lot (assuming he commits). In my mind, he is the most likely to start alongside Reece next year if he comes. Tony loves combo guards and London is a special talent.

I completely agree that both Isaacs are likely to play big roles as well. They’re both special talents with clear fits for playing time.

I think you can realistically count on Reece and Kadin continuing on their steep development curve (traditionally under Tony, it’s been the third year where our players have made the biggest leap) and at least marginal improvement from Franklin and Gardner from a full season of playing Tony’s defense. Maybe Franklin will shoot a little better from 3 too. So there’s that.

I share your concern about the distribution of the remaining playing time among the 1st and 2nd years. One or more are going to be unhappy, as well as many of our fans.

I can’t agree that this team has quietly improved a lot over the course of the season. Where would I see that?

Not sure how much this shows, but on Torvik’s game scores, we do have a slight upward trend over the season. One additional bit of info to throw into the mix: 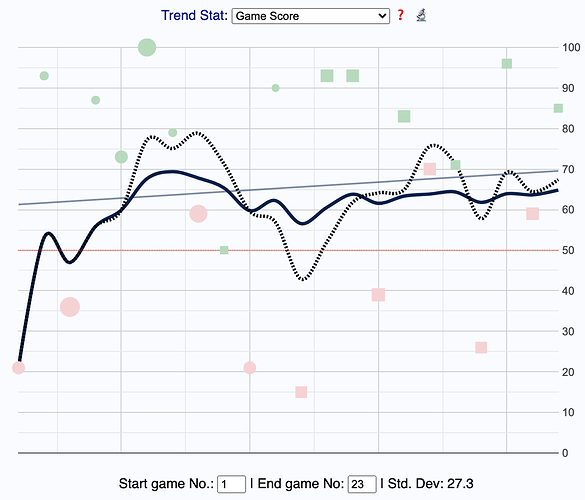 Yeah, I’m totally fine if we don’t land huge names or guys in the top 40 as long as we get the lower-ranked late summer bloomers Tony has fallen in love with in the past after his initial targets didn’t pan out. I will get anxious if we end up doing the clear “Oh crap, we’ve got nobody and need a guy, let’s snag somebody who looked half-way decent” thing again.

Yeah, I keep an eye on that. I don’t know how that translates to our efficiency (90 right now on Torvik) but my guess would be something like we started in the low 110s and have improved to 90 or so.

I’ll lay my cards on the table, though I don’t have much of a poker face to begin with. I really think the “do nothing and watch things steadily improve” has taken on a bit of a wish fulfillment thing among most of our fans. And the people who write content for our fans.

This team is no good and doing nothing with it (Tony’s strategy this year) will more or less keep it not that good (or, in a narrow band from “hey we beat BC” to “ugh we got curb stomped by Clemson”).

Tony is still a HOF coach and the future is bright BUT the present continues to make me scratch my head.

(And yes, I realize that all of this mostly reflects my temperament as a pessimist and the typical fan who wants to be an optimist)

So youre having a better day today Haney

Been a rough week, Fresh. Don’t mind me!

(Normal daycare back next Monday, so I promise to return to normal pessimism level … maybe)

I’ll lay my cards on the table, though I don’t have much of a poker face to begin with. I really think the “do nothing and watch things steadily improve” has taken on a bit of a wish fulfillment thing among most of our fans. And the people who write content for our fans.

This team is no good and doing nothing with it (Tony’s strategy this year) will more or less keep it not that good (or, in a narrow band from “hey we beat BC” to “ugh we got curb stomped by Clemson”).

Tony is still a HOF coach and the future is bright BUT the present continues to make me scratch my head.

Yea I tend to agree with you. Still high on the longer term projection but I don’t think we are out of the woods next year like many seem to expect. I don’t expect to be back in contention until the year after Isaac^2 gets in the rotation.