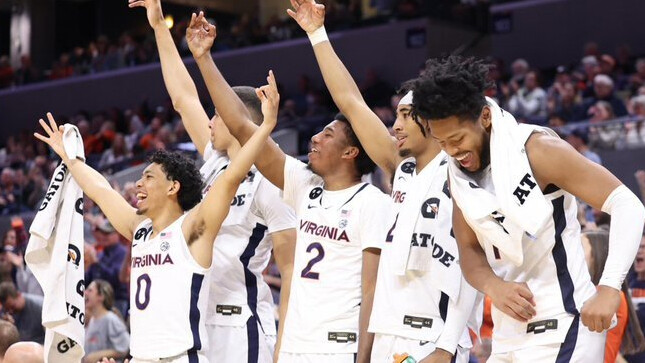 Unbeaten Virginia will play its first true road game of the season at Michigan on Tuesday night as part of the ACC-Big Ten Challenge.

They might counter with putting Hunter on Jayden Gardner to hide him. But we gotta make him work. These large bigs are so exploitable.

Time stamped for just one example. The screen isn’t set well so the man guarding the guard isn’t completely removed from the situation but look at all the space Dickerson is giving him.

Dickerson might also do that in general and dare kadin to shoot all game.

If Papi plays we have to feed him. Make Dickerson work. If we only put in Papi to match size wise on the defense end then Dickerson becomes the happiest man in the world.

Best defense on Dickerson is to make him work and run around in the half court and get him in foul trouble or make Juwan adjust by taking him out of the game.

Easier said than done files: make Hunter catch it 3 feet or more off the block. Do we even bother doubling?

Also, we are gonna run tomorrow!

Illinois was just about as close to a road game you could get. Very loud for a neutral site game

Even though the crowd was against us, it was great to see us play in an early tourney with actual crowds for a change. So much better than the Sheraton conference rooms we’ve played in.

had no idea Joey Baker transferred to Michigan, but definitely understand why he wouldn’t stay at Duke.

Is anyone from the LRA community going to be at Crisler? I know a couple and I’ll be there, but I’m just wondering who might actually live in Michigan or the Great Lakes area.

had no idea Joey Baker transferred to Michigan, but definitely understand why he wouldn’t stay at Duke.

Maybe Baker is the one who really got “Uncaged”…

Good for him that he got a year back after K burned his redshirt with a whole 18 minutes of playing time.

That was a dickhead move by K

100%. There’s a reason bigs like this have been rendered a non factor in the NBA. Set good screens on the perimeter and isolate him all game long. And to Fresh’s question, try to run. And yes, double the post. Their guards aren’t shooting well.

Hey Juwan, show us up your nostrils and then sit directly in front of the light source. Thanks.

Is it Dickinson or Dickerson and did we try and recruit him?