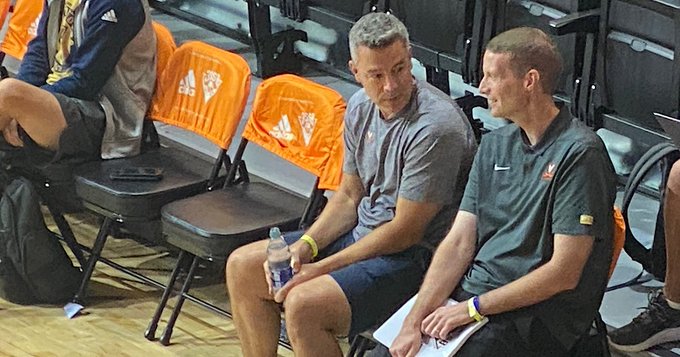 The Virginia coaching staff is finishing up another five-day long live evaluation period on the road, the last of the summer.  It’s been a hectic week, as the coaches move around to see all of their top targets while searching for new ones along...

While we wait for offers, Ty Davis highlights.

Also putting Davin Cosby highlights here to manifest that offer. We need to add shooting and he would do that. I hate that Im saying this but his player comp in my mind is Trevor Keels. Still getting comfortable to driving and using his frame in bully ball like keels. Also not sure if he has the confidence to get KEELSMODE tattooed on his chest.

And it’s been a while since we’ve been rejected by a Richmond kid.

Yeah, I get the Keels comp. Big bodied guard with skills who plays mostly beneath the rim because he’s got no hops. Should be a great college player and stay around for a few years given that latter factor. But I thought the same about Keels (although maybe he really should have stayed for another year or two).

First player that popped into my head when watching Cosby was Lamar Patterson, guard that used to play for Pitt. Old school style game but very strong and could really shoot it.

Did we know that these visits were gonna happen this soon? I thought he was gonna go to Duke in the fall? Has his timeline now moved up? @CoachDavidSisk
T.J. Power confirms to @HeelIllustrated that he will be taking an official visit to North Carolina Monday as first reported by @allasley. 6-10 forward who averaged 15.3 PTS, 8.9 REB, and 4.9 AST at Peach Jam for @thebabc. Will visit Duke Tuesday.
2 Likes
Hooandtrue July 25, 2022, 3:36am #8

It’s a good question. It’s good that he’s getting the visits out of the way and they are each only a day long. It’s bad that he’s visiting them LOL.

While I hope that’s the case, I hate that “the CTB conversation” is actually a thing

I think it was just him visiting his family in North Carolina after his team finished in Georgia and he was like “I have these two official visits left that won’t carry over in a week or two. Might as well since im here”,

“Have a seat, we have much to discuss”

after his team finished in Georgia

Good point. With the Peach Jam schedule, he hasn’t seen family or friends in close to a year.

That’s a good gif, but I just realized…is that the game I think it is? Like, a tournament game in 2018?

What game? We didn’t even make the tournament in 2018… really not sure what y’all are talking about

Not sure if there even was a tournament.

Virginia: “I had a zoom call with them and they just were being really honest with me. They told me they needed to see a little bit more off the bounce but they really love my game and wanted to keep watching.”

Imagine this was Tony when he needed to see more from a recruit.