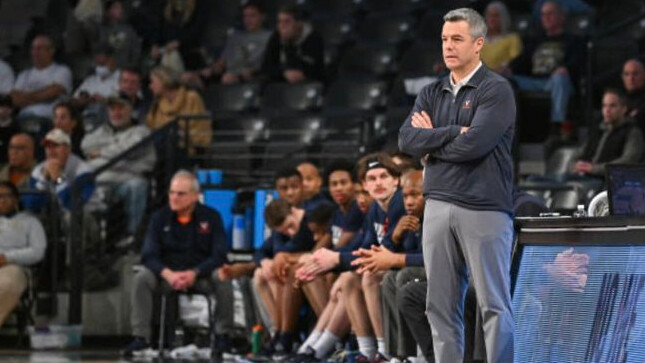 The 11th ranked Virginia Cavaliers will face another stiff road test on Tuesday night when they take on the surprising Pittsburgh Panthers.

Is Hinson someone we can try Dunn on for stretches? Obviously big experience gap.

These 9pm tips are killing me

Is Hinson someone we can try Dunn on for stretches?

For sure. Dunn can guard anybody 2-4.

UNC was -6 at Pitt. Not sure to take that as disrespect or bettors catching on to Pitt. They’ve covered 9 straight btw.

We win by 10 tomorrow so play accordingly

If I were neutral I’d take Pitt in a second. Last year we needed a home miracle and was a very close game at Pitt.
Hoping Reece and Sheds can play like they did last year there. Great timing for me - have a work dinner at 6:30, will get home in time to start watching. Should have enough booze in me to be ready for the ACC refs.

Fair. I havent watch one second of Pitt this year so no clue. Thats why we play the game! The Pitt Panthers are likely to be without John Hugley for a third straight game.

One of the biggest differences I’ve seen is that last year they couldn’t shoot it but this year they have 4 guys who can get hot…
The 4 leading scorers are also their 4 best 3 point shooters.
They are also big and physical and 2nd in the ACC in rebounding.

9pm tips are killing me

Tell me about it. LOL!

This year’s Pitt squad looks more similar to the Jamie Dixon teams from the late 2000’s and early 2010’s, at least offensively. Capel has used the additional year of eligibility to stock his roster with a bunch of grown ass men at the guard and wing spots, just dudes that play old school bully ball and can also hit a 3 to help space the floor. They’re pretty average defensively and turn the ball over quite a bit, but hit the boards pretty hard (averaging 40 RPG).

Even with all of that I think it’s gonna be the same deal for us as every other game this year, if we’re hitting shots from deep we should win comfortably and if we’re not it’ll be a fight for 40 minutes.

We could very well lose this game. Reece is still a bit balky, and it’s a conference game on the road. But Pitt is going to finish bottom half of this league or I’ll eat my hat (by which I mean, I will not eat any of my actual hats, I need them to keep my head warm in the winter and protect my bald spot in the summer, but I will be surprised if it happens).

Nice win against UNC, but I don’t trust this UNC team as far as I can throw it. Maybe UNC will pull it together and win the natty, or maybe they’ll stumble and forget to make the tourney. Both still on the table. Other than that, solid win at NC State. And what else? Blown out a bunch early, and a loss at meh Vandy. You want to throw N’western in the solid win category? Ok, I guess, but I won’t join you.

Especially without Huguely. They’ve got a bunch of super seniors who are … y’know … fine. They seem like a team who may be a tough out in round 1 of the NIT, or maybe they’ll win a game on a Wednesday in the ACC-T.