It would appear to be here @DFresh11; however, if there’s still more to come, I’m here for it!

Thinking about how fun it’ll be when Reece has a sniper (or at least above average three point shooter) at the 2 and maybe a 4 who can step out and shoot the three. Going to be fun to watch him command things.

Also would be really cool if next year he was tutoring a young London Johnson, but if that happens in 2023, that’s cool too. I do get a little confused by what happens at the 2/3 guard positions if London comes next year and overlaps with Reece by two years, but still think it’d be great for the team overall.

Brings up a really good question about who the potential starter is next to Armaan and Reece assuming Kihei goes and Gardner comes back. We’d need a starter to replace Kihei. Could it be Taine with another year of seasoning? McKneely or Bond? A wing transfer?

Not sure how many of you frequent the College Basketball subreddit (https://www.reddit.com/r/CollegeBasketball) but “Reece!!” is sorta becoming our version of BROGDON lol 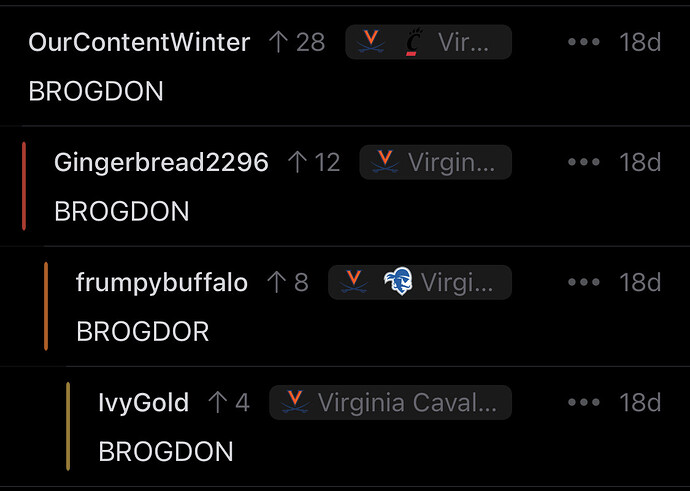 My Hope for next year is:
Reece, Isaac, Milicic, Traudt, Shedrick
with Armaan, Murray, McCorkle off the bench in that order - unless London comes. Then he moves to 6th man spot.

If Armaan, Jayden, and Kadin are all back next year - which seems likely - it’s hard for me to imagine Tony not starting all of them alongside Reece. Could be wrong, but it’s just difficult for me to picture an alternative.

That would leave Taine, Igor, McCorkle, McKneely, Traudt, Bond, and Dunn all fighting for the one open starting spot plus like three spots off the bench. And if London came early that’d make it 8 guys competing for 4 spots. I’m guessing we have one transfer this off-season, so would probably be more like 7 guys fighting for four spots (and maybe Dunn redshirts or something), but would be a high-level competition for playing time.

Does he enter the NBA draft conversation as an early 2nd round pick? And then potential rise as that bespoke / analytics / Virginia defense guy?

Feel like he also needs to have a breakout game on national TV.

I dont think so on that small of a sample. Id want to see another season of it if I were an nba team.

Could be - if Pat Beverly can be in NBA rotations then Reece can.

Think he needs to finish strong and do the elite point guard camp circuit in the summer ala Ty. And open up NBA eyes that way

His problem at the next level isn’t so much making shots as getting shots off. He can create space fine but he’s gotta get to where he can rise and fire.

Yeah, I didn’t watch the game but after seeing the box score and looking at how he’s done in ACC play I started having the same concerns.

But then I went and watched the Pitt highlights (which are basically all REECE!!), especially his outside shooting, and was a little less concerned. Don’t get me wrong, he’s a disruptive glove on D, his vision and ball handling are terrific, and he’s getting increasingly crafty inside. But his outside shooting is a little less compelling. His form leaves quite a bit to be desired, and might not actually be any better than it was earlier in the season, they’re just going in now.

You never know what’s going on in someone’s head, but if he keeps hitting 3s at a decent rate (say 35-38%), then the minute he shows up with a revamped outside shooting form is the time to get worried about him declaring.

I think at least 1 or multiple NBA teams would be willing to spend a late 2nd for that potential development. If he shows an outside shot, he could work his way up to the late 1st as a developmental PG.

The defensive questions would be could he handle defending a 3 or 4 on a switch given his current slight frame.

I mean if we’re comparing 6’2” 160 lb guards from Virginia, he has a better chance to make it than Kyle Guy did because he’s less likely to be attacked by the other team and played off the court.