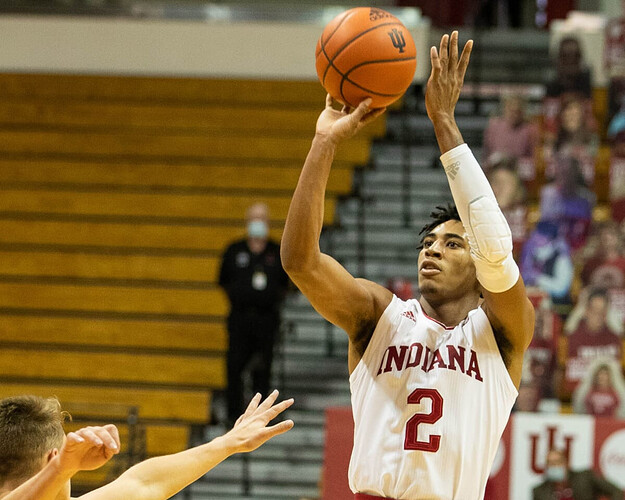 Tony Bennett landed his first big recruit today in this year’s transfer market.  Former Indiana guard Armaan Franklin will be a Wahoo.  The 6’4 sophomore is coming off a breakout season in which he averaged 11.4 points while hitting 42% of... Excited about the next chapter in my hoops life. Still, have to say a big thanks to the IU community, fans and my teammates for all their support. Know that I appreciate you all so much! ⚔️🔹🔸⚔️ @UVAMensHoops https://t.co/NErzsdMDXL The love he has received from both IU fans and players is pretty great. Seems like a great dude and very well liked

Point guard: Reece
Shooting guard: Armaan
Small Forward: TBD (Trey Murphy/maybe the Arizona guy if he transfers and doesn’t declare/Seth Lundy/unnamed name)
Power Forward: Jayden Gardner
Center: Grad big or big who plans to be in the NBA year after next to let Kadin take over in 22/23 (Liam Robbins is my vote)

Bench:
Kihei 15-25 minutes (kihei and reece playing for at least 5 minutes together may be unavoidable we’ll see)
Taine and McCorkle at the 2 but also some 3 guard lineup action.
An athletic 4 freshmen/4 years left/Maliq Brown reclass?/Someone who can play the 3/4 like David Joplin
Kadin
Bobi reclasses and redshirts

A buddy of mine coached him in high school. Said he was a great kid. Spoke really high of him on and off the court.

Love the optimism for the starting lineup. Quick question though, the only multi year starter that Tony Bennett put into a reserve role as a senior that I can think of is Jack Salt. Can you think of anyone else?

Nope but the times are changing (that’s all im saying. Enough threads have already evolved into pg discussions threads LOL).

I too was convinced for a while that Tony was irrationally attached to Kihei and that he shouldn’t be starting, but I’m not sure there is much evidence for it. He wants to win, and he definitely knows the players strengths and weaknesses better than we do. If the best lineup next year doesn’t include Kihei, then he probably won’t start. I think time has shown that not much if anything is given in this program, you gotta earn it.

Idk man. The national title year the starting lineup we went with for most of ACC play as one of our worst lineups. About as bad of a lineup as you can produce with 3 NBA players in it. If we weren’t lucky enough to get killed by FSU in the ACCT would we have ever made a change?

You mean the ACC regular season where we lost to a total of one (1) team?

Salt became less effective in the postseason because everything gets harder in the postseason. Tony noticed, made the switch to Diakite, and we have a title because of it. Lets trust the man a little lol.

A little adjustment- Justin Anderson was coming off of a broken finger in which he missed several weeks? Months? That’s why he was benched. Otherwise he was shooting 50% from three and thus a first round pick.

Ah you’re right, I forgot about that. Fair point.

Trust Tony win win a lot of games and do it the right way? Of course. Trust him to bench Kihei if Reece and a SG is the better combo? Na. Have to see it to believe it.

Lol Tony wants to win. Last year due to the weird roster, Reece and kihei was the right play. Last year, lacked a solid shooting guard; might as well ensure you have defense and ball handling

Disagree it was the right play but I’ll leave it at that. I’m sure people would rather talk about next year’s roster than rehash that discussion. I hope most of the minutes next year only have one of Reece to Kihei at a time. A versatile guard like Franklin should make that more plausible.

We had no defense in the front court. Putting two legit defenders in the back court was the right play.

We’re going to have to coin a new law of the internet, maybe called Kihei’s Law, that states that any Virginia message board thread allowed to go on long enough will eventually end up as a debate about whether Kihei Clark should start.

I’m just happy for some positive momentum. Relatively speaking, the past month was a rough stretch for Hoo basketball fans, going back to the COVID mess in the ACC tourney.

This feels like a big win. Reece and Franklin gonna just delete some opposing backcourts.

I can’t remember exactly the order of the starting lineup permutations though. Did Salt get benched for Diakite or for Clark towards the end of the season? What were the most common 2 man starting combos excluding the big 3?

Man I love this guy already