Sorry, and I mean no disrespect to anyone else, guru or otherwise, but you are the most informative poster on the board. By a wide, wide margin.

That was me thanking them for agreeing with me that H&T was a great poster in here.

@HoozGotNext or anyone who would know. Didn’t UVA used to have camps like this? Not for youngins but for basketball prospects from High schools around the area. @coreyevans_10
Virginia elite camp shaping up to be a good one this wknd. Myles Dread, Wendell Moore, Robby Carmody, & Dwayne Cohill among those expected

Last elite camp UVA had in 2015. Was about as stacked as any ever anywhere. Keldon Johnson Chris Lykes Markelle Fultz. Prentiss Hubb Armando Bacot.

Will most likely be one of the 50 2024 recruits at our Home game vs Houston. Houston Tennessee Virginia Wake Forest @JamieShaw5
4-star SG Juke Harris says Virginia and Wake Forest are among the four schools he’s talking with about official visits Harris goes in depth with @On3Recruits on all four programs and breaks down his recruitment READ | on3.com/news/juke-harr… https://t.co/2YlEhL3YIC Virginia : “Coach (Tony) Bennett just came by last week to watch me work out. He is telling me I’m one of the main guys and I fit their game. They let me know how their organization runs.”

Juke Harris is a legitimate big guard. He is at least 6-foot-6, with long arms and broad shoulders, giving him a projectable frame moving forward. Harris is comfortable on the ball, handling and creating in the half-court. He is also a smooth shooter, with confidence from beyond the arc. We would like to see him elevate his release point on his jumper, especially off the catch, but the form and release are good with this minor tweak. Harris is a good athlete, but he is not super bursty. His IQ and feel allow him to get to his spots off the bounce. He is a good team defender and understands angles and footwork on that end of the floor. With his frame and natural skill set, there is a pretty high ceiling for what he could continue to grow into. 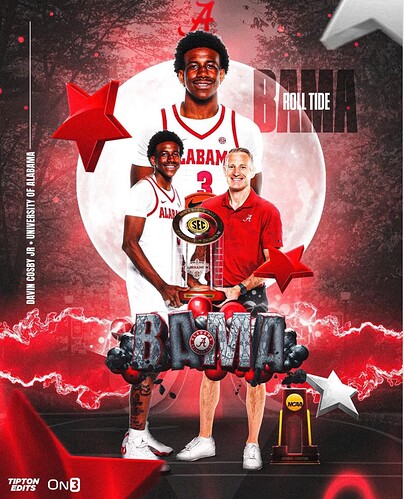 Don’t really care about him not coming to Virginia. But man, a kid from Richmond going to Alabama for basketball over an ACC school prioritizing him (Wake Forest). The times are changing.

He will definitely have a good time. Whether he gets better, wins games, and makes his PRO dreams come true. We will have to see.

While I had hoped he stayed in the ACC, can’t say I blame him. Nate Oats vs Steve Forbes seems like an easy decision to me.

Nate Oats vs Steve Forbes seems like an easy decision to me.

I’m not sure I personally understand the Nate Oats hype tbh. He seems like a guy who gets a lot of praise with not a ton of results. Not saying there aren’t any results, but it’s not like he’s set the world on fire by any means.

Just an FYI they were double league champs in 21

edit - Alabama that is. @JaxonPrunty
I am extremely blessed to receive an offer from Old Dominion University. Thank you to Coach Jeff Jones and Coach Jamal Robinson. https://t.co/RgYa92yfe3 Good that he has options.

Don’t really care about him not coming to Virginia. But man, a kid from Richmond going to Alabama for basketball over an ACC school prioritizing him (Wake Forest). The times are changing.

Although back in the day (late 70s/early 80s, I think), there were three brothers who played for some very good Benedictine teams, and all three went to Auburn, if I am not mistaken. Bob Bundy went from Manchester to Vanderbilt. But, then, how many folks think of Vanderbilt as SEC?

Oats has been good at Bama. Players love him and he’s a good recruiter. Has a chance to be one of the top coaches in the game.

I don’t have anything against him other than he coaches Bama. Would be thrilled if he ever coached UVA once Tony retires.

Unless there is shadiness I’m not aware of.

Meh- he’s had a couple of good years so far, but is still new at Bama.

Players love him? I would hope that all players love their coach, otherwise they should transfer.

Not saying you’re wrong, but nothing special for me yet,except he has Alabama money!

Yea probably wouldn’t be possible with Bama money but if TB unexpectedly retired early Oats would be number 1 on my wishlist.