I remember going to the Duke game Feb of 2020 before the world collapsed and Duke was denying Clark the ball so someone else had to bring the ball up. That guy was Braxton and he did a hell of a job beating the Duke press.

It is pretty crazy how much NBA talent Tony’s been able to produce without a single 5-star recruit. You can see just when he starts to turn things around — and since this chart is outdated, the bar for 2021-22 should go all the way to 12 (I made it before the Key & Diakite signings). There definitely have been changes on the NBA end to make this easier, especially this year w/ all the hardship exception pickups, but it’s hard to argue that the recent CTB era isn’t one of the best in UVA bball talent history. 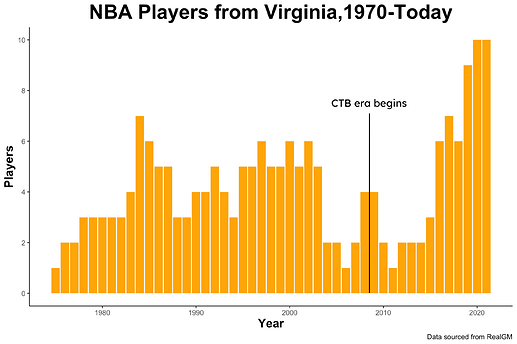 Brax had decent playmaking instincts. I think he may have played some point for Bama? The year before Sexton?

It’s a clunky comparison, but he’s sort of similar to Reece. Very good defenders. Good athletes. But held back on offense by an inability to shoot. Brax also had an odd habit of finishing poorly in 18-19, but I think he figured that out later.

That’s a good comparison. Key was a really solid player (he was on the floor at the end of OT during the national championship game and even scored the final points of the game. Have to be pretty good to do that!) who might have a better shot at being appreciated in the pros than in college.

At the college level, his biggest strength was in his breadth of skill rather than depth. He could do basically anything and do it well (other than maybe shoot, which he could do, but not well).

For a big man he was an excellent passer and ballhandler. For someone rarely thought of as a rim-protector he was a surprisingly good shotblocker. He wasn’t a Hunter or Brogdon-grade elite lockdown defender, but he could competently guard 1-5 and was a excellent help defender. He was above average at almost everything, but none of it was very flashy.

On the downside, his weakness on offense was easily noticeable. He wasn’t really a very good offensive player. He had 1 season (2019) that, by KenPom’s reckoning, was substantially better than Kihei Clark’s worst offensive season. Key could and did attempt a moderate volume of 3 pointers but he wasn’t very good with them, he wasn’t particularly adept at finishing close to the rim, and he was a below average free throw shooter (though he was pretty decent at drawing fouls).

The point being, its really easy to point to his overall stats and recognize why he isn’t more appreciated. But the NBA has a metric ton of resources devoted to figuring out which players genuinely add the most value beyond bulk stats, and I suspect to them Key looks a lot more attractive than he does to a casual fan. Doesn’t mean he’ll end up with a real NBA career (though that would be great), but I do think he at least has a chance.

Also doesn’t help that TB that TB chose Kihei-Kyle-Ty lineups over Braxton-Dre-Mamadi lineups for most of ACC play and the tournament that national title year. People complained about Jay’s PT but Braxton was the one who really got the short end of the stick there. I’ll always have a ton of respect for Braxton for how maturely he handled that situation. And obviously he was rewarded with a national title!

Yeah! The end reward was pretty good! I want to say he was robbed of being 6th man of the year in the ACC in 2019 but Kabengele was really good so I can’t hate that as much as I’d like to.

Because my pettiness knows no bounds, I’m still annoyed about the ACC semis that year. We matched up Huff on Kabengele and Diakite on Koumadje when we should’ve done the opposite. Kyle Guy now upgraded to a two-way contract. Signed for the remainder of the season. Pretty awesome news

@IraHeatBeat
The Heat have waived Marcus Garrett due to an injury. They now plan to sign Kyle Guy to a two-way contract. Garrett will undergo wrist surgery and then rehabilitate with the team the balance of the season.
22 Likes
jazznutUVA January 16, 2022, 5:51pm #635

Can two-way players play in the playoffs?

Unless there is a rule change, two way players are ineligible for the playoff roster.

They could upgrade his contract if they want, right?

They could upgrade his contract

Yes. The Heat have an open roster spot. Adding someone now has luxury consequences. Most Heat followers have expected Caleb Martin to get that full spot prior to the playoffs and late enough to minimize tax implications.

Dangerous play. Guy is trying to get out of the restricted area so he undercuts a 7 footer. This is why they invented goons in hockey.

Man that looked ugly all around. Glad Jay is okah