A little bit of good news: Thunder organization has a reputation around the league for taking care of guys while they rehab injuries. It’s Presti’s M.O. to take care of his players. Whether or not Mamadi makes the roster, I bet they’ll let him use their facilities to rehab & recover even if he doesn’t make the final roster — they’ll keep him around the OKC Blue or something.

Any news on why Ty didn’t play last night? Seemed entrenched as a reserve but wasn’t sure why he sat last night. I assume that means he got picked up by a team. Do we know who?

No idea but that was my assumption too. Maybe it involves Nets getting rid of Kyrie?

It would be great to end up on the Nets and compete for a championship. Not sure how much run he would get though. He doesn’t really fill Kyrie’s skill set - not that any player does

No matter where he goes he is going to be an end of bench depth guy until he can prove otherwise with his 3pt shooting. But man he is more athletic than half the NBA.

That is a pretty pretty common tweet for JA. Not to say this time it isn’t tied to some particular news, but since he frequently tweets that exact phrase I just assumed it was an expression of his faith.

Saw this cool piece of community outreach by Brogdon & the rest of the Pacers. Malcolm is just a quintessential leader of men. Awesome dude.

The Indiana Pacers made a trip to the Putnamville Correctional Facility on Thursday. The entire team held conversations with inmates about life on the inside, and racial disparities in the justice system.

“They incarcerate more people than any other country in the world, and they incarcerate black people about five times as much as white people in this country,” says Pacers guard Malcolm Brogdon, “To be able to come in here, and see the humanity in people, people who have made mistakes, people who haven’t made mistakes, and are in here innocent, it gives you a sense, or a feeling of sadness. You come in here, and you see so many able, smart, brilliant men and women behind bars when they shouldn’t be. I think God has put us on this earth to help each other any way you can. Right now, it’s my job to make sure it doesn’t happen, and to make sure the system changes so that it’s not targeting black men and women.”

The players also coached a game between inmates. The sides were led by Pacers stars Myles Turner and Brogdon. It became apparent as the game began that one player rose above the rest literally and figuratively. Travion Qualls is a 25-year-old inmate from Elkhart, Indiana. He gets out in two years after completing a six-year sentence for being an accessory to a robbery. Before his arrest, he spent two years playing college basketball at Manchester University. 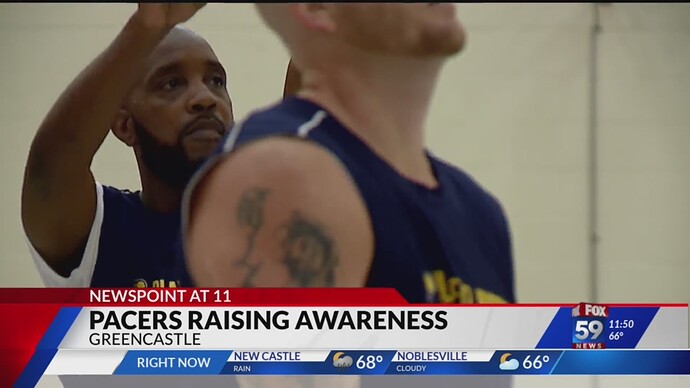 PUTNAMVILLE, Ind. — The Indiana Pacers made a trip to the Putnamville Correctional Facility on Thursday. The entire team held conversations with inmates about life on the inside, and racial dispari… @ChrisFedor
So with two-way deals going to Tacko Fall and RJ Nembhard, #Cavs are waiving Justin James, Kyle Guy and Mitch Ballock, sources say. But the plan — and hope — according to sources, is for all three to play for the Cleveland Charge.
1 Like
Hooandtrue October 16, 2021, 5:51pm #135

Guy just needs to go to europe and collect those 6 figure salaries while traveling europe with the baby.

And if he is successful he can turn them to 7 figures tax free! @mcten
The Lakers announce they have signed Jay Huff out of the University of Virginia with their final two-way roster spot.
22 Likes
Gna2r October 18, 2021, 6:08pm #140

Oh wow! Nice job Huffzingis! Good for Jays agent in putting that together as well…Hopefully LB welcomes him and teaches him alot about work ethic in the pros.

I think Jay Huff is the only real stretch five on LA’s roster. Could see some playing time this year, especially if AD continues to weirdly refuse to play center during the regular season. This is a really good landing spot for him (even keeping in mind that realistically he probably won’t play much).