I again find it funny bringing up 2 of the worst guard shooters in the NBA … neither of which elevates a ton on threes. Why not bring up Guy? or Rex Chapman? or Ray Allen?
Also … my larger point was that he can get his own shot and get clean looks at the end of clocks under pressure. That photo was a game winner in transition.
We’ve been sorely lacking that since the big three left.

Probably because you made the comparison between Isaac and MJ and he was pointing out evidence to the contrary? I think it is pretty standard that if someone asserts “if A then B” that one might want to bring up examples of “A but not B.”

MJ comparison was a bit tongue in cheek.

An example of a dude with gravity: 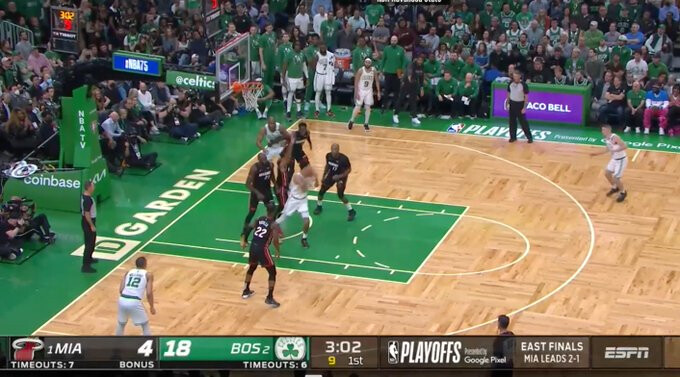 Oxymoronic from Tony?
At the start of practice, the players gathered at midcourt around Bennett, who reminded them that Boston had turned the ball over at a staggering rate against Golden State in the recent NBA Finals.

Had the Celtics not been so careless, Bennett told his team, they might well have been crowned world champions. To drive home his point, he kicked off practice with a drill that emphasized sureness and ball security.

Bennett said his “words of advice for the four first-years when they came were: ‘Listen, you’re coming in here, and when we start our workouts, don’t make the mistake of trying to be perfect and feel like you’ve got to show your teammates and coaches where you’re at. Be freed up.

Yup, it seems to me that a coach has to be careful to find a balance between “minimize mistakes” and “minimize assertiveness”, especially with 18 year olds, and I wonder if Tony might’ve found himself on the wrong side of that see-saw the past year or two.

Not yielding is a great way to put it. Come in like you belong from day 1… because you do

yep - that part is great … for mistakes - I like it worded the way Wooden said it.
I’m a strong believer in mistakes. Anyone not making them isn’t doing anything.
Careless mistakes are different than mistakes of aggression - be aggressive all the time.
The Celtics were so passive at times tossing the ball all over the park.

Yes. Have said it before. There is a such thing as good turnovers when mase agressively and not carelessly to your point.

I don’t think it’s quite oxymoronic but it’s close. One of those nuanced situations. Obviously you have to be sure handed with the ball, if the quote is accurate he does not say they have to be perfect just mindful. I think that’s a reasonable expectations. The message for the first years also resonates, he’s telling them to come in and be themselves. Don’t force it by trying to do too much. Let your game flow and learn from those who are already there.

I wouldn’t be surprised if 90% of the coaches around the country gave a very similar talk to their clubs as well. I know I gave a similar one every season.

That’s a great quote. As a rugby coach I addressed this a lot. Rugby is not a natural sport for most American players, and at the club level you have a massive gulf between players. I’d see it all the time, great athletes etc. who were paralyzed by fear of making a mistake because the game was not second nature to them. I sat with a lot of athletes talking them through that process and could be heard saying if your wrong be strong. It’s a delicate balance to instill confidence while also maintaining a standard. But generally speaking, I’ll never rack a player for aggressive penalties.

An early coach/mentor of mine would actually encourage us to take a few penalties early in games to gage where the ref stood on enforcing of the laws.

unlimited penalties in Rugby per player?

Lots of games I wouldnt mind Reece!! having one or two attacking TOs

Essentially yes, but a repeat offender could be carded (likely a yellow). Also at the higher levels, teams can punish penalties a lot harder with guys who can kick for goal from 50+meters, or they have effective lineouts.

Still have to be smart, but it’s similar to making an aggressive play to start a basketball game and forcing the ref to call a foul or not. Within the first 5 mins you have an idea of what you’re working with and what you can get away with.

An early coach/mentor of mine would actually encourage us to take a few penalties early in games to gage where the ref stood on enforcing of the laws.

Good advice. Yep my daughter was a high level lax player (defender). Always started very, very aggressively to see how the game was being called that day.

Totally agree. Baseball has always been my favorite game because the greatest hitters of all time failed 2/3 of the time. Coaching 7-10 year olds, I always start off the season by reminding them that we can’t learn without making mistakes. I let them know that I will never get on a player for making an aggressive mistake, or going down swinging aggressively. I will get on them for not paying attention. I always stress that they owe it to their teammates to have their heads in the game and try their best every time they step onto the field—game or practice.

Good HS story for you. I started every game in HS and proly led team in minutes all years. Pre senior year we are in team summer camp at MTSU. You play 3-4 games a day etc. So one game I am not playing good at all. But hustling.

Coach takes me out and I was like “dang man I am working hard!” “yes Douglas but you suck today sit down”