I like the roster flexibility too. But our best teams also featured multiple future NBA players in their second, third, and/or fourth years in the program, which this team probably doesn’t currently have outside of Reece. So I’m still lower on our overall ceiling relative to past UVA iterations, but I’m hoping we can outperform some recent squads.

I think for me, right now, Sweet 16 is probably my bar for being happy with the season, but am curious how others feel after seeing our start.

We can beat anyone … not sure we can win 6 in a row. Elite 8 is very possible if last year’s Miami team could do it.

Sweet 16 = satisfied but think we could have gone farther

Tbh a lot depends on how we play these games and who we play. We get a surging 6 seed as a 3 seed in the round of 32 and I’ll shrug my shoulders a bit.

Tbh a lot depends on how we play these games and who we play. We get a surging 6 seed as a 3 seed in the round of 32 and I’ll shrug my shoulders a bit.

I’d still peg our most likely outcome as Sweet 16 (which is also roughly what our metrics and rankings would suggest), but I agree that the details would matter whether a round 2 loss would be a disappointment or not. That said, a sweet 16 loss is a win away, yet a world away from a first weekend loss. It’s a whole other level of hype (about a week or so).

At this point, based on metrics/ranking, we are a coin flip to the Elite 8. I’d be OK losing in the Sweet 16 depending on the matchup. Once into the Elite 8, it’s all about the matchups (who doesn’t want the plucky 13th seed St. Nowhere to play at that point as opposed to one of the #1 or #2 seeds that have slugged their way to that point). Honestly, after the first round as a 5 seed or less, every game after is matchup dependent with a healthy dose of luck heaped on top.

Honest question — would you have thought — after the Northern Iowa cancelation — that UVa would have entered the week “bye” period 15-3 and top 10 in the country with (1) Clark playing 33 minutes per game, (2) Beekman getting injured twice already and having been less than 100% in about 8 games, and (3) a starting lineup of Clark, Beekman, Franklin, Gardner and Vander Plas for the majority of January games?

At this point, based on metrics/ranking, we are a coin flip to the Elite 8.

At this point according to NET we’d be a coin flip to win in the 2nd round … I mean right now Bracketology has us playing against Auburn in the Round of 32 … they are 16-3 so a better record than us … and are in 2nd place in the SEC behind only Alabama … I might even think we’d be the underdog in that game.

To be honest … and I had posted this long ago, it would depend on how far along the freshmen were and how much actual playing time they were getting … I was definitely skeptical of our chances when Traudt redshirted because I wasn’t a fan of Gardner getting a ton of minutes again … but the emergence of Dunn and McKneely has elevated our chances over what it would have been if Gardner were still getting 33 minutes and 12 shot attempts per game. And of course BVP being enough of a threat to really space the floor … to be honest if I were teams I would still force BVP to beat me by making shots … in the last 8 games he has games from threeland of 3/6, 2/4 and 3/7 … but also games of 1/4, 0/1, 0/3, 2/6, 2/7 … during that same stretch he is 11/19 on two’s … some guys have more gravity outside the arc than they’ve earned … I’d make him prove it to me…

Edit 2 … Never mind - you said after 2 games before Vegas … so nope I wouldn’t have guessed it …because we hadn’t shown anything yet except that Traudt had invoked his redshirt the night before Monmouth.

Edit 3 … I thought good chance we would be 7-2 in the non con and we ended at 8-1 … I also didn’t know that FSU would be a dumpster fire when we got to play them twice and we’d get UNC without Nance or Bacot … didn’t know yet that Pitt wasn’t gonna be terrible …
So that early on I probably would have had us at about 13-5 right now … assuming Isaac and Dunn were getting plenty of PT … and Dunn’s had double figure minutes 8 of the last 11 games. 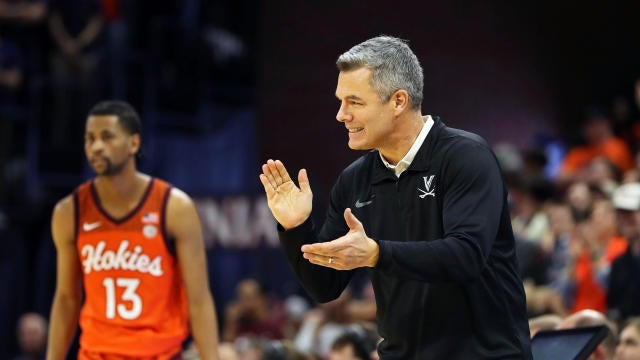 Isaac Trotter needs to get a room w/ BVP.

A better record because we didn’t have the Northern Iowa game and their losses were to Memphis, USC and Georgia. None of our losses look like that.

Pick one metric or ranking and you can certainly posit a high probability of a coin flip to win in the round of 32. On average though, we are a solid 3 seed at this point (one of the teams that is the theoretical 9th to 12th best team in the tournament). As such, Sweet 16, odds are we would play a 2 seed. Not much difference as it becomes dependent on whether we are 9th overall seed and thus play the 8th - that seems a coin flip to me on this basis. Same with 10th versus 7th. The coin flip is weighted if we are the 11th or 12th overall seed. So maybe a 50/50 coin flip isn’t the right analysis - maybe it’s a pair of dice and we are 5 out of 11 to roll six or less.

Eyeball test says we are very good. On a given night, we can get to the Elite 8. On another, we lose in the Sweet 16. If we are on the 3-line, we have a 99.3% probability of winning in the first round (historical percentage), which is much better than the 94.3% winning rate for 2 gseeds. Percentage of a 3-seed winning the second-round game is 84.7%. So, I don’t believe we will be in a coin flip to get out of the 2nd round, based on a combination of current metrics and rankings.

Edit. Auburn no longer has the better record. Lost tonight to Texas A&M by 16.

Well I learned that I will be in Vegas for a conference during the Sweet 16 games.

So I don’t really care about seed, other than we get placed in the West. Would love to see the Hoos go 4-0 in Vegas this season!!! Our PGs have just been incredible over the last ten

The turnovers per game is skewed based on how few possessions both UVa and Wisky have due to their play style. I’m not discounting the protection of the ball, but it definitely helps they both limit possessions.

True - a better stat would be turnovers per 100 possessions.
Like for example UVA is 9th in the nation in lowest turnover % this year - still great.
Wisconsin is 4th … and the most surprising one I saw was NC State at 2nd in the nation after Penn State.

I think still the #1 area we can use improvement in is rebounding …
Currently 194th nationally in total rebound %.

NC State at 2nd in the nation

Woah. That is not the NCState basketball I have come to know and love!

That’s composed of bad offensive rebounding, which is practically a TB trademark at this point with his emphasis on transition defense, and solid defensive rebounding (#81 in country per Torvik).

Here’s a fun graph to further showcase the stats above. The difference between us and UL is hilarious. 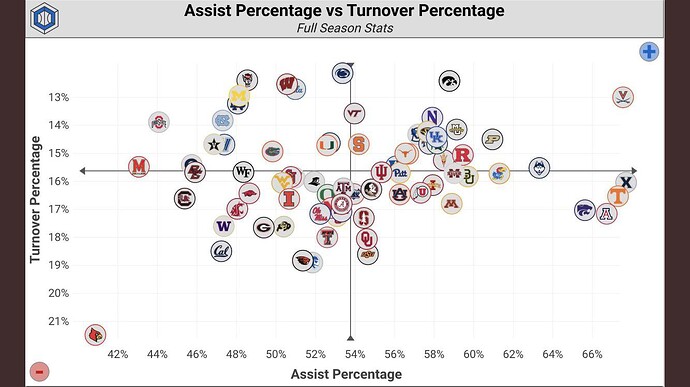